Robin Nicholas created the most recognisable and widely used font in history, in the form of Arial. Quentin Newark talks to him about its gestation and recent projects

FEW graphic designers ever create work that reaches very large numbers of people. A hit album might sell three or four million, an illustration in Vogue will be viewed by five million, while the logo for a corporation could be seen a few hundred million times before being consigned to the dustbin. But in Robin Nicholas, we have a graphic designer who can sit alongside Levi Strauss (designer of blue jeans), Raymond Loewy (creator of streamlining) and Akio Morita (creator of the Sony Walkman), and be said to have exerted a massive and lasting impact on our culture. For Nicholas is the designer of the most-used typeface in history: Arial.

No one has exact figures for how often Arial is used. The number of PCs in the world is estimated at around 360 million, and Monotype estimates Arial to be on 95 per cent of all computers, making a figure of 342 million. If each computer uses Arial once a day, then what’s the guess: 120 billion uses in a year? That makes a trillion in a decade. These are figures that most designers can only dream of. Who is this man and what is the secret of his success?

Nicholas began in the Monotype Drawing Office in 1965. He learned how to draw type for punch-cutting and metal reproduction, and the then newfangled process of photo-setting – a revolutionary method using light (a beam of light was shot through a letter cut into a strip of tape or on to glass disc). Type was no longer made of rigid metal – suddenly it was flexible, and could be stretched, crunched, overlapped, scaled and adapted as never before.

In the late 1970s, he began to use computers because of their accuracy in calculating and copying shapes. The process involved using a huge Icarus system by Sun Computers to capture the outline of the letters, before transferring the finished type to glass photo-setting discs. While necessary at the time, this elaborate transfer now seems excessive. Nicholas had to design each font to stand up and remain crisp throughout this process: from paper to computer to glass to bromide to film to plate, and back to paper again.

When the Apple Macintosh computer was launched in 1984, it was so simple that people thought of it as a toy, but gradually the Mac’s power and programs became more sophisticated. Initially, Nicholas began to use it to proof fonts, then to draw (as well as proof) them. Now – like most of us – he uses it for every stage of his work. Some of his typefaces (such as those he designs for the Web) never leave the digital world in which they are born.

Arial first saw the light of day in 1982 as a typeface designed for IBM for use on a low resolution laser printer, made up of bitmap data. The brief was for a ‘work-a-day’ font, one that could be read under adverse circumstances, such as inadequate inking or the wrong paper. Robin (and his team) built Arial using various Grotesques as precedents. IBM was happy – so happy that Arial became a standard fixture on its PCs. Then, without anyone really understanding the implications, the font was carried along with the Microsoft phenomenon, and suddenly the world was full of Arial.

Nicholas calls Arial an ‘industrial sans’, making it sound like a font made of die-cut steel or cast like bolts. It clearly indicates a typeface designed to avoid problems of any kind. So many fonts seem like wimps in comparison. Most have their foibles: you can’t really use it as text; it’s difficult to read; you need to watch those thins under about 16 points. Of course, there are other über-fonts too – those that appear on every PC and work in almost all conditions. Along with Arial as the sans, these are usually a serif (Times), and a mono-space (Courier), but Arial gets far greater use, largely because of the Web.

Of course, Arial has its critics. The strongest complaint is that Arial is a mimic of Helvetica. Actually, in its detail Arial is closer to Monotype’s own Grotesque 216. Maybe its apparent similarity to Helvetica comes from the fact that it has similar aims – a simple form for robustness and a large x-height for legibility. Another common criticism is that Arial is just downright ugly, that it lacks finesse. It’s also sometimes seen as a ‘scourge’, or even a Microsoft ‘virus’. Much of this is really a snobbish attitude towards anything associated with Microsoft. And Arial’s ubiquity takes from typographers the thing they most relish – choosing the right typeface for each task. 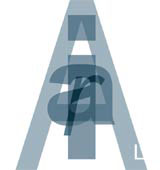 As Nicholas’s working methods have evolved, his company, the Monotype Typography of 1844, has evolved too. It is now Monotype Imaging and its activities include: writing font-related software, typefaces for corporate identities, and acting as merchant for fonts designed by small foundries or individuals. As head of its design studio, Nicholas’ latest projects involve designing fonts for mobile phones.

He is a profoundly modest man, like all craftsmen. He is not particularly fond of Arial. ‘It does a job well,’ he says. He prefers projects like the reworking of Dante. Originally drawn by Giovanni Mardersteig in 1954, Dante harks back to wonderfully readable classical book typefaces. Nicholas is most proud of the ‘life’ in the letters, the rhythm of the forms, the movement the eye makes from shape to shape. Does this mean that Dante will last as long as Arial, or longer? As designers, should we worry about the simple and crude winning out over the beautiful and sophisticated? Well, worry away, as you sit there in your denim jeans and T-shirt, doodling with your Biro.

The cult of the ordinary