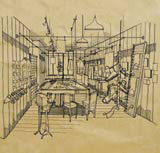 Outdoor footwear and apparel manufacturer Timberland is launching a flagship retail site for its sub-brand Timberland Boot Company this week, with an interior scheme drawn up by Checkland Kindleysides.

The company is aiming to roll out additional stores across continental Europe and the UK, targeting ‘major cities’ as part of its long-term strategy to expand the sub-brand. The shops will stock a premium clothing range under the Timberland Boot Company brand, which will operate independently of the rest of Timberland’s lines. Checkland Kindleysides was appointed to design the first retail outlet, based in East London’s Spitalfields, following a pitch held last year. It is not yet clear if the consultancy will be retained to design the interiors for the pan-European roll-out.

The Timberland Boot Company retail estate will follow an unusual proposition, positioning the sites as retail-cum-community venues, where local groups are able to showcase art exhibitions and to stage events. The venues will be drawn-up according to a ‘place-based’ philosophy, referencing local heritage and culture using repurposed and recycled materials. This moves away from the identikit store formats typically favoured by high street retailers, according to Checkland Kindleysides senior designer Russell Ashdown.

The Checkland Kindleysides-designed store is based in a former banana warehouse. Cardboard banana boxes are stacked on especially designed racking to create a stockholding wall at the rear of the store and boots are displayed in clusters hung from the ceiling to resemble bunches of bananas. Box rolling racks, discovered in the basement of the building, are used as display tables.

‘This is much more the approach of the independent shopkeeper and the antithesis of high street retailing. Our approach has involved respect for context, designing in a sustainable way and seeking to fuse the store with its surrounding community, while at the same time providing an effective base through which to trade,’ Ashdown explains.

‘For the first site it has been about being inventive, physically building as little as possible and developing inexpensive but effective solutions by recycling, regenerating and repurposing,’ he adds.

The design-philosophy has been some two years in the pipeline and the challenge now is to find appropriate sites across the world, says Vishal Gohel, concept manager at Timberland Boot Company. ‘The store and its whole concept is very different to other Timberland [retail sites]. We are looking for more locations, but it is early days,’ adds Gohel.

The launch comes as the retailer seeks to boost sales amid fierce competition from the likes of Adidas and Nike.

• In 1973 the Abington Shoe Company introduced Timberland as the brand name for its waterproof leather boot; the group name was changed to the Timberland Company in 1976

Dyson clears the way for a roster of specialist groups