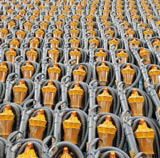 Dyson is building its first formal roster of design consultancies, under plans to forge closer relationships with diverse specialists.

Five consultancies have been selected to provide the global electrical goods manufacturer with consultancy services and expert skills from retail to graphics, packaging, innovation and events. Although the company is keeping the details of the roster under wraps, Design Week can reveal that it will be working with Hat Trick Design Consultants, Sea Design and Thirteen.

The rostered groups will not be asked to take whole projects into their own hands, but will be used as a ‘reality check’ on the work of the company’s 65-strong in-house graphics team, according to Dyson creative director Jim Turner.

‘Dyson’s graphics team is involved in every aspect of the company’s global markets, but we thought it would be a good idea to get together with external groups, as they can offer different philosophies and skill bases. They will work with the internal teams so that they can learn from one another,’ adds Turner.

According to Dyson creative head of global brand Alistair Nash, the decision to create the roster is a ‘measure of good practice’. ‘It makes common sense to meet people who can give us creative collaboration. And it [means we] avoid having to go through horrible pitch processes, which I’m not a big fan of,’ he says.

The first project has been given to Hat Trick and involves a rethink of Dyson’s internal administrative forms. Turner hopes the group will inject ‘wit, intelligence and typographical skills’ to bring the forms to life.

Other projects will be developed on an ad hoc basis. There is no guarantee of work, nor is there a formal, fixed-period agreement for the roster groups, says Turner, who adds that additional consultancies may be added to the roster.

Nash has also developed a two-strong roster of local groups in Tokyo, providing consultancy support to the in-house design team in Japan.

Dyson is poised to reveal a series of new product designs, but there will only be minor tweaks to the brand’s visual languages, adds Turner.