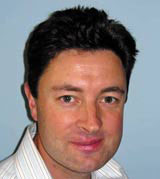 I remember the interview clearly: Yasuhiro Kira, head of Yamaha’s design team in Hamamatsu asked, ‘Why do you want to come to work in Japan?’ A good question, when you think about it, and I suppose I must have avoided the obvious answer of, ‘Well who wouldn’t?’ A few weeks later, I found myself on a plane bound for Tokyo, with my wife and two small children, heading for the unknown. I use the term literally, as there had been hardly any talk of working methods, team and management structures, or even potential projects. After 12 years working in the British design industry, this was an interesting feeling.

As I was the only non-Japanese designer in the team, the new working situation was as challenging for my colleagues as it was for me. I later discovered that the entire team had been instructed to use English in any meeting at which I was present – an incredible feat when you consider that their only experience thus far had been in school. This was part of a wider initiative to globalise the thinking and working methods of the Yamaha design studio, and my appointment was the beginning of a methodical, ongoing programme to broaden their design thinking.

The classic image of the Japanese workplace is one of long hours, a rigid management structure and a ‘job for life’ mentality. It is superficially true, but as a Westerner I never felt under any pressure to subscribe to it. Furthermore, the conservative ethos was balanced by a liberal project style, with the emphasis on the designer’s individual direction. As a manufacturing company, Yamaha’s engineers and marketing teams have a strong bearing on what the designer can achieve, yet the designer is given a surprisingly relaxed framework in which to work.

Typically, each designer runs several concurrent projects from concept through to production, with much importance placed on the idea of ownership – the individual is always credited in any publicity material. I was always amazed at how faithfully my design concepts were translated into prototypes. The dedication, enthusiasm and, indeed, speed of the engineering and development teams are something to be seen. That said, the designers are worked pretty hard – the Yamaha team comprises fewer than 25 individuals, set within the vastness of the Yamaha Corporation. Yamaha believes that by keeping the team so small, its brand essence is nurtured and understood in a way that would be impossible with a large team.

In addition to the designers’ main workload, there were many subsidiary projects: meetings to investigate brand architecture; experimental projects; and even regular in-house exhibitions gleaned from personal collections, which ranged from vintage hi-fi equipment to Japanese craft objects. The diligence with which these exhibitions were curated, discussed and photographed, in the context of a demanding work schedule, never ceased to inspire me.

On the subject of inspiration, you would be hard pushed to find a successful designer who was not influenced by Japanese creative culture. When I was a student, Japan was a byword for everything super-cool and superbly engineered. Interestingly, my Japanese co-workers held a similar admiration for all things British, plus an often disarmingly in-depth knowledge. One colleague carried a Manx banknote in his wallet in reverence for the Isle of Man TT race.

On the surface, the Japanese design studio can appear as a collection of individuals unflinchingly pursuing their own agendas, often in profound silence. The kind of chatty interaction or spontaneous collaboration that a European designer takes for granted is largely absent. However, the much-fabled Japanese team spirit is instantly activated if the need arises, or at a predetermined juncture. The spirit of the Japanese design team borders on the familial, with all ‘members’ taking lunch at exactly the same time every day, at the same table in the canteen. By way of release, there are frequent team visits to karaoke bars, where secretaries and bosses alike sing their hearts out.

Unlike karaoke, where you’ll be appreciated for singing up, to succeed in the Japanese workplace you have to fight your instinct to fill the long silences in business meetings, and learn the ancient Japanese art of modesty. Furthermore, if you thrive on cut-and-thrust, and like nothing more than a deal done and a decision made, Japan may not be for you.

David Keech worked at Yamaha in Japan from January 2003 to February 2005. He is founder of Keech Design Consultants