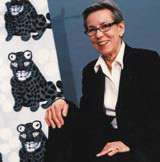 Bringing her mother’s seminal 1960s designs for Marimekko back to life, to feed the current vogue for authentic retro textiles, is a labour of love for Kristina Isola. Hannah Booth travels to Finland

Kristina Isola, designer at Marimekko — the Finnish textile and fashion house — hasn’t designed anything for three years. Instead, she has been cataloguing, updating and re-issuing hundreds of her mother’s prints from the 1940s onwards. ‘It’s better for me and for Marimekko,’ she says, in her self-effacing manner. ‘I love designing, but I haven’t had time to do it.’

Isola’s mother Maija is, to many, Marimekko. From the late 1940s to 1987, when she ‘retired’ from the company (she was never a staff member, always freelance), she created hundreds of Marimekko’s most loved textile designs. Bright, Pop Art flowers, such as Unikko (1964), now grace everything from Marimekko mouse mats to credit cards. Other memorable designs include: her 1962 decorative, damask, repeat-pattern series, Barokki; the exquisite, pressed flower silhouettes, such as her famous cow parsley pattern, Putkinotko (1957); and her many homages to 1960s psychedelia and flower power, including upside-down strawberries floating in a cloudy sky.

Kristina started working with her mother’s designs at the end of the 1990s. ‘She was a very good designer, and very systematic — so her archives are excellent. Marimekko had many other good designers, but it’s harder to find their material because their archives aren’t as accessible,’ she says. Her work is two-fold: ‘I preserve Maija’s designs, and update them. For example, we use wider sheets of material today, so I have to ensure nothing has white borders. Often I have to re-do [a pattern] completely.’

Maija Isola joined Marimekko at 22. The company’s founder, Armi Ratia, was looking for young designers at Helsinki’s Ateneum art school, and its artistic director, Arttu Brummer, suggested Isola. The year was 1946 and she was already a mother, having given birth to Kristina aged just 19. A young, free spirit who wanted to see the world, Maija handed Kristina over to her own mother on the family farm outside Helsinki. Maija’s marriage to Kristina’s father (commercial artist Georg Leander), ended in divorce in 1948 — the first of many failed relationships.

‘I lived with my grandmother because my mother travelled so much,’ says Kristina. ‘But when I was 14, I moved to Helsinki to live with her, and I did my first designs for her when I was 16. Then one day, she returned from a trip to the US and said she’d stop working for Marimekko completely unless I started working with her full time.’ The heartfelt ultimatum worked.

Kristina doesn’t begrudge Maija, who died in 2001, anything. ‘I did miss her sometimes, but I accepted the situation. I idolised her as a child; she was so beautiful, so nice to me,’ she recalls. ‘But life was good on the farm. Later we became more like sisters – we went to restaurants together and were very close.’ 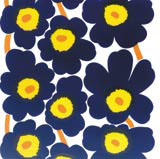 Maija’s nomadic lifestyle took her around the world, even though travelling in Europe after World War II was difficult. With her second husband, Jaakko Somersalo, she hiked around Europe, sleeping under the stars. She worked at her designs when she came back to Helsinki. ‘During these years, I remember Maija working on the floor of the dining room at the Isola family home,’ says Kristina. ‘She’d cut a pattern into pieces of rubber matting to use as printing blocks, then spread ink on the block using a roller.’ A design would be given a name once Marimekko decided to buy it. ‘The accepted designs were hung on the wall,’ she recalls, ‘and we would sit in our chairs and drink coffee. We would say a word in turn that seemed to suit the design – it often turned into a game of association.’

Kristina hopes Marimekko’s current designers aren’t overshadowed by their illustrious predecessors. ‘They often ask to see her work and I help them out a lot, so I guess they’re inspired by the older generation.’ As for Kristina, she can’t help but live in her mother’s shadow. But she won’t be in the archives forever. ‘I will start designing again, one day.’

Marimekko: Fabrics, Fashion and Architecture runs from 10 September to 8 November at The Lighthouse, Glasgow