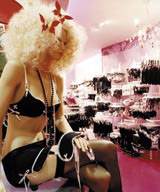 The smartening up of chains such as Harmony – by Spacecraft – and Ann Summers – by Design Ministry – and the arrival of Hustler and Playboy stores was coupled with activity at the premium end of the market. Pioneer Agent Provocateur was joined by the likes of Coco de Mer and Myla. Suddenly, this new generation of sex and lingerie shops was appearing on high streets and in shopping centres.

All these retailers still rely on lingerie for much of their livelihood. This is hardly surprising given its booming nature: lingerie accounts for up to 25 per cent of female fashion spending and is growing annually at 8-12 per cent, according to a sector report by Echochamber.

This is certainly the case for Ann Summers. ‘Lingerie has been forging ahead and we had 11 per cent like-for-like growth, for the year ending June,’ says marketing director Gordon Lee.

However, the ‘product’ department has become increasingly important – not least for raising the retailers’ profiles. Products fall into two camps. Putting the ‘fun’ into ‘functional’ are the somewhat tacky toys, including the big-selling Rampant Rabbit. Ann Summers is proud to stock a platinum version, retailing at £40.

The other end of the market is occupied by tastefully crafted mini sculptures such as Marc Newson’s Mojo (£69) and Tom Dixon’s Bone (£199), both stocked by Myla.

However, the new money is on the gap in the market between these two. For while the Rabbits and their ilk may do the trick, they are hardly likely to appeal to the design literate, and for all its beauty, Bone has been accused of underperforming.

As Durex’s consumer research discovered, there are plenty of badly designed objects that are effective and only a few beautiful ones, but these do not do the job as well.

Or as Alan Lucas, managing director of designer sex toy retailer Tabooboo, puts it, ‘On the whole, the products work, but they look rubbish, or they look good but are just ornaments.’ Tabooboo has 170 vending machines in the UK and 70 overseas, and the company is opening three UK standalone stores later this year, though there are no design details at this stage.

Into this gap come two new products, each aiming at a different pocket, but both keen to trumpet their marriage of design values and efficacy.

Durex’s owner SSL is behind a triumvirate of vibrators entitled Durex Play. The hope is that by bringing out three variants – Wand, Little Gem and Charm – there will be something for everyone. Nick Talbot, design director at Seymour Powell, which created Play, says the idea is to ‘normalise the purchase and use of vibrators’. Think mainstream rather than furtive.

They may share similar product design credentials and a keenness to avoid any connotations of sleaze, but the two newcomers are pitched at very different audiences. Play, which comes in at £30-£50 and has packaging, including a handy suedette pouch, by Kinneir Dufort, is obviously hoping to encroach on Rabbit territory. Je Joue is aimed at the more prestigious end of the market. At £200, it’s up there with Bone. As Je Joue’s managing director Helena Jevons explains, ‘It’s aimed at women who are confident about their sexuality, have a disposable income to spend on things that make them feel good, and are interested in technology.’ This last part is particularly important, as Je Joue’s software allows an endless number of Grooves to be programmed.

As Sophie Hatch, managing director of The Nest (responsible for the name, branding and packaging) suggests, it will appeal to the sort of women who happily shell out on an iPod or a pair of Jimmy Choos.

The premium packaging comes in rich purple, with a simple silhouette of a woman and a velvet finish inside the box. This, coupled with its premium price tag, means Je Joue is looking to be stocked in similarly upmarket retail environments, though details of the autumn launch are yet to be finalised. Play, meanwhile, is to be found on Superdrug’s shelves.

Lucas, for one, is cautious about the actual size of the market, partly because repeat purchases are relatively rare and can’t be relied upon. ‘It’s smaller than people think. The new players are over-optimistic,’ he warns. Try telling that to the proud new owners.

The public sector pitch process is too impersonal