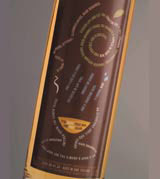 ‘What is the use of a book without pictures or conversations?’ mused wide-eyed Alice before she tumbled down the rabbit hole. Lewis Carroll was obviously not thinking about the design industry when writing his children’s classic Alice’s Adventures in Wonderland, but the same question could be asked of the design world, which is founded on a combination of image and word.

Visual representations are inextricably tied up with language; the lexicon overshadows the entire design brief, from concept through to the final solution. Historically, design consultancies may have led projects and sourced the copywriters directly, but clients are increasingly turning to distinct groups of wordsmiths to bolster the design process, drafting them in right from the start to tap into their expertise.

As a result, a host of projects emphasising creative writing in design is emerging, generating work that evolves traditional product, brand and interior formats.

The Scotch Malt Whisky Society recently commissioned 26 writers and designers to explore the use of language, creating identities for 26 of its finest malt whiskies. Design groups involved in the project include The Partners, Lippa Pearce and Elmwood, as well as artists, poets and copywriters. All the designers are members of the 26 collective, which launched in 2003.

The whisky labels are vibrant, playful, feminine and evocative, featuring poems, teasers and salutations. The work is exhibited at the Scotch Malt Whisky Society in London from this week and will form part of the London Design Festival later this month.

‘This was a dream brief. The creative use of language to promote brands is sometimes overlooked,’ says Stuart Delves, director at Henzteeth, an Edinburgh copywriting firm contributing to the project.

Ink Copywriters is collaborating on a series of design-led projects with consultancy Jory & Co for the Marriott hotel group. It is in the process of articulating a tone of voice for the Grosvenor House Hotel in London, ahead of its rebrand as a Marriott hotel in 2007, and is working on a similar project for the Marriott-owned Shelbourne Hotel in Dublin. ‘There is a more strategic approach to using words in design now and a growing awareness that language can build loyalty,’ says Tom Chesher, director at Ink.

Ink is also working with Design Group on a Christmas project for Royal Mail to provide the copy for a letter and activity fun-pack that will be delivered to children who write to Santa Clause.

‘The challenge is to produce a narrative, to give Santa a tone of voice to create the magic of Christmas. We have developed a story, telling kids what Santa has been up to, such as getting his hat back from the elves,’ explains Chesher.

The industry would do well to acknowledge the magic that good creative writing can bring to design and branding.

‘As consumers, we are not seduced as easily. Copy must work very hard to achieve stand out,’ says Mark Jory, creative director at Jory & Co.

More emphasis is being placed on words

• Companies, such as drinks brand Innocent and online banking firm Egg, are looking at new ways of talking to consumers, developing distinct tones of voice