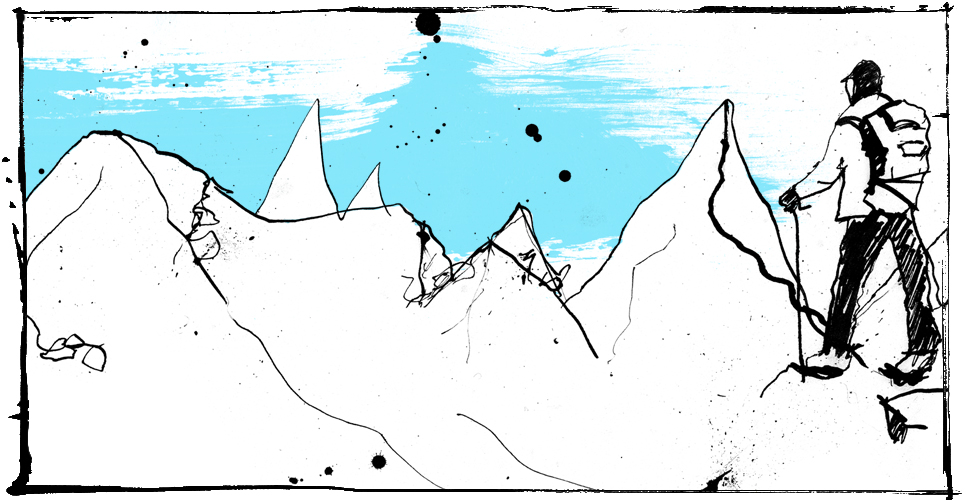 I found myself in the pub on a very oddly positioned bank holiday Monday, immediately following a well-timed Sunday new year’s day, 2017. A friend who was keeping me company asked me what my resolutions were, suggesting I would likely be “one of those bastards with insurmountable goals for the coming year, such as climbing Everest.”

The truth is, I don’t set them. I am always tasking myself with new projects and I suppose it’s nice to enter something as tangible as a whole fresh new year with a big one on the horizon. So this got me thinking and it became apparent that my goals are often outside of my specialist creative discipline of illustration. Why?

In 2012, I decided to invade the music industry, joining forces with a writer to work creatively with bands and solo artists. 2013 spawned a charity awareness campaign on behalf of Campaign Against Living Miserably (CALM), championing the emotional benefits of creativity. 2014 was when my angry freelancer-tells-the-story blog became a more objective reflection and 2015 saw a properly published book, leading to the subsequent launch of Arrest All Mimics, my weekly creative industry podcast as we headed into 2016.

This year I’ve signed up to a creative writing evening course with my Christmas money and I plan to have a go at writing a fiction novel.

“Do illustrators suffer from an underlying unrest?”

I started to wonder if these annual assaults on pastures new indicated some kind of underlying unrest at being an illustrator, a job that for many years spent in education, represented a dream career. Tapping my pint glass, I stared absent-mindedly at the football results and pondered whether my priorities were in order. Then, thinking about my return to the studio the next day, I felt that buzz of anticipation, starting small and working itself into a full-on wave of adrenaline in my guts.

This is my eighth year as a full-time illustrator and I’ve worked with dream clients including World Wrestling Entertainment (WWE), Leeds United and The Guardian. They all happened much quicker than I could have hoped, so to offset the risk of growing complacent, I’ve always sought out the next high, the new buzz. In turn, when the new appeal begins to wane, I run back to my ink pens and get messy. It seems that the more I explore new disciplines, the more things I either eliminate from my “can do/want to do” list. I either learn that I am awful at it, dislike doing it, or strip the good bits from it and add some valuable new strings to my bow as a visual communicator.

“Illustration is my strongest asset but not my driver”

For me personally, illustration is my strongest asset, but not my driver. Creativity is the real fascination and if I don’t feel like I am being challenged, I get stifled very quickly. Besides, if I do not feed my mind with new ideas, the illustration will repeat itself and where is the excitement in that?

It is not without mistakes. I get my legs slapped on a regular basis. This idea that I have a decent story to tell, that I can progress from writing as Ben Tallon, to writing as some maniac or romancer in a novel may result in a embarrassing voyage of over-ambition. But I never see such adventures as wasted. If this is the case, then I’ll surely be scrambling back to the art studio to try and claw back some confidence and self-worth from more familiar pursuits, with a renewed appreciation of what I know I can do successfully. It’s happened before and it’ll certainly happen again, but if my mind is riddled with apathy, then everything I try to do will crumble anyway. 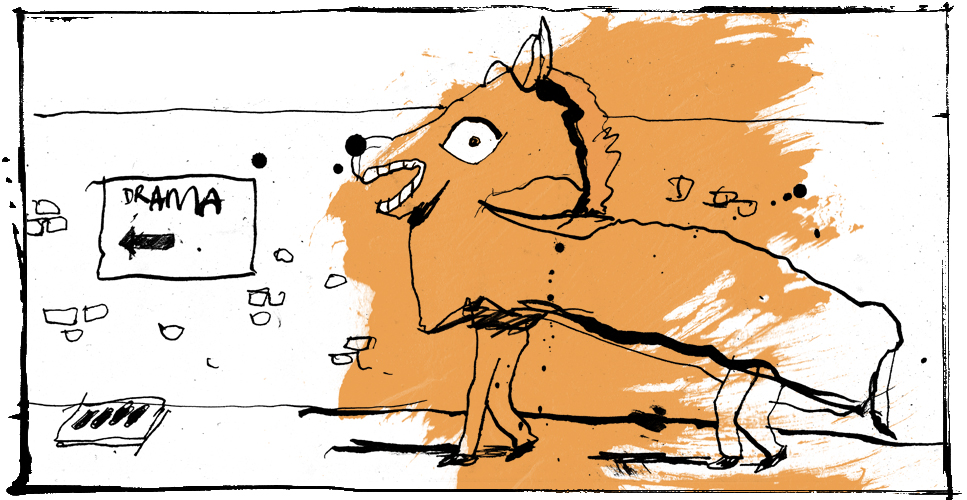 We all need to stimulate our enthusiasm and lust to create. How we go about doing it is an individual conundrum. But for me, I have to go there to come back and if one day I find something greater than this drawing obsession of mine, then that’ll be a beautiful thing. But the big revelation hasn’t happened yet and what I’ve ended up with is a very broad week-to-week range of jobs and projects, somehow coming together to provide me with a great balance of excitement, challenge, creativity and income. I can only wonder what madness will invade my brain by the end of this year. Drama classes? Singing lessons? Mountaineering? Watch this space.

The design possibilities are endless with “invisible glass”