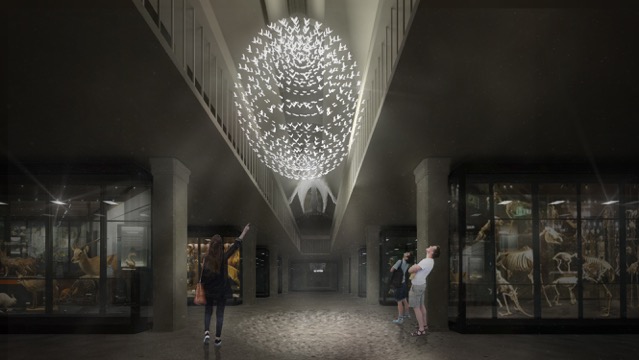 MET Studio has designed the space for a new climate change exhibition in Manchester, which aims to encourage people to take “individual steps” that could have a “collective impact” on reducing carbon footprints.

Climate Control, which was opened by Dame Vivienne Westwood at the Manchester Museum today, includes a series of immersive installations and experiences which ask visitors to reflect on the past and look at how they can shape the future.

Use of paper is limited and illuminated LED signage is used throughout the exhibition to encourage eco-friendliness, says the project’s creative lead Houri Boughosyan.

The exhibition is based on the story of Manchester’s peppered moth. The moth was originally dotted to camouflage against lichen on trees, but adapted to grey following the industrial revolution, and is now turning spotty again as Manchester becomes greener again. The moth motif is used as a “beautiful statement of transformation”, says Boughosyan. 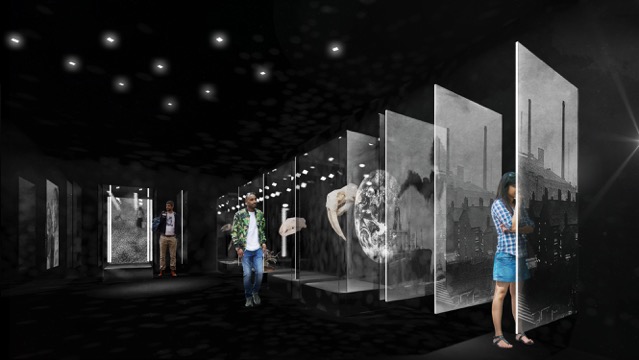 Installations are split between two galleries, the Temporary Exhibitions Gallery and the Living Worlds Gallery.

As visitors enter the Temporary space, they are encouraged to design their own exhibition experience from the start, and are made to choose between walking down two pathways – “Explore the past” or “Explore the future”. 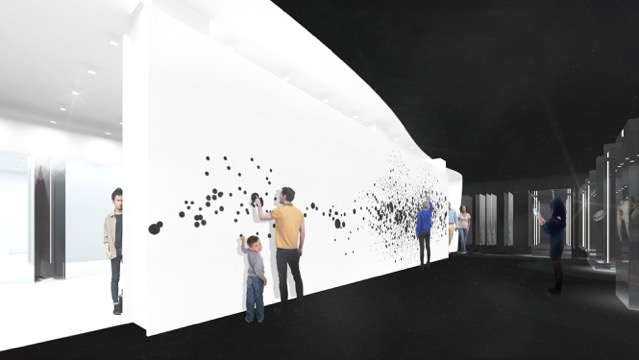 Installations include “Together, we all make a difference”, a 9m wall with a black side and a white side, which invites visitors to answer questions about their daily lifestyles. They then mark their carbon footprint with black stickers and eco-friendliness with white stickers, based on their answers.

Another installation, entitled “Blue Sky Thinking”, allows visitors to write down their own ideas of how they want to shape the city they live in. These are then projected onto the wall through acrylic LEDs, which aims to show “collective impact” of individual actions, says Boughosyan, and unite visitors in their opinions. 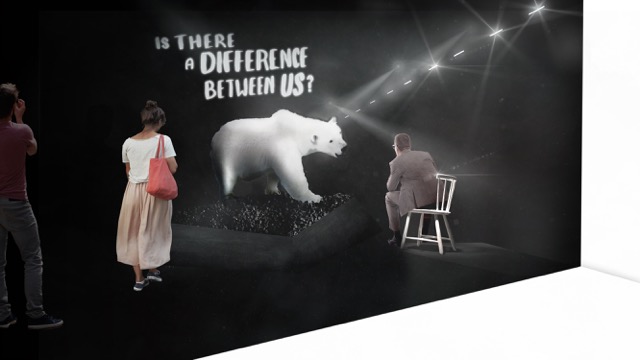 “Arctic Witness” is an exhibit of a taxidermy polar bear, and aims to incite visitors to reflect on the possibility of extinction, says Boughosyan. The bear is positioned on a black stage opposite an empty chair, where visitors are encouraged to sit and “gaze into its eyes”. An identical empty chair sits in the polar bear’s normal home, within its case in the Living Worlds Gallery – this aims to make a statement that “humans could also one day vanish”.

The Living Worlds Gallery sees a series of posters which provide visitors with different ways they can make a difference to reducing their carbon footprint. While the rest of the signage in the exhibition is LED, these have been designed to look like “stencil, protest posters”, says Boughosyan, to add a “human, empowering touch”. Bringing the exhibition round full-circle, the gallery also features a three-metre aerial globe constructed out of fake peppered moths.

Climate Control runs from 11 May – 4 September 2016 at the Manchester Museum, The University of Manchester, Oxford Road, Manchester M13 9PL. Admission is free.

“It all starts from the food” – Afroditi Krassa on restaurant design