How much space you get, and what kind of space, depends almost totally on decisions made by other people. 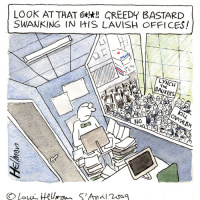 For instance, three days a week I sit at a desk which is too small for comfortable editing, which is what I do when I’m not also writing, or out seeing things to write about. I need space to spread out reference material. Not everything is Googlable/ on the first Wednesday in April I needed to refer to a large, tattered and heavily annotated map dating from some time in the mid-1970s.

My small desk, however, stands with others like it in a large office with acres of floorspace. And yes, I could spread out the map on the floor. But I could not spread out my plumbed-in desktop computer on the floor, and I needed to toggle between the one and the other, the analogue and the digital worlds. This was not my own office, it was someone else’s, and they make the decisions on desk sizes because what they do mostly does not involve large, dog-eared old documents.

All this was making me cross, so I quit the office and walked to the Bank of England, thinking how I might get to redesign the office. The G20 summit was on, helicopters were hovering overhead, police and ambulance sirens were wailing. I’m a Londoner, there’s nothing a Londoner likes more than a dash of mayhem, and I’d heard there was a bit of a rumble going on at the Bank.

And so there was, to judge by the noise and the massed ranks of police, some of them openly fondling their truncheons. But exactly what kind of rumble was unclear, because the police had done their usual thing of corralling all the protesters into one short stretch of street. The protesters, having smashed the windows of a lesser bank or two nearby, were clearly going to be cooped up there for many hours. Their movement was excessively restricted by the truncheon men, nobody had any space at all, but they were all – like a crowd at a football match, only without the seating – having a splendid time.

I couldn’t see anything much, so I walked away, dodging through the City’s back alleys to avoid the crush. It set me thinking about the old myth – that you could get the world’s entire population on to the Isle of Wight if everyone were standing up. Apparently, the area required is rather larger these days – some say the whole of Wales would be needed – but that’s not quite the point, is it? The Stuart Cavalier poet Richard Lovelace is largely forgotten but for two sentimental poems. The better one is called ‘To Althea, from Prison’, containing the lines ‘Stone walls do not a prison make/Nor iron bars a cage’. Freedom, according to Colonel Lovelace, was a state of mind rather than a physical condition. Lucky he felt this way, since he spent quite a bit of time in prison for one reason and another, and used the time to prepare volumes of his poems and plays for publication.

Thus I arrived back in my badly planned office with the too-small desk and the map that still did not fit it. But in the meantime I’d seen the crowds packed uncomfortably tight outside the Bank, thought of the horrors of panic and violence, and remembered Lovelace quietly getting on with life behind bars he pretended weren’t there, prior to dying in extreme poverty.

Redesign the office? I don’t think I’m going to complain about my working conditions ever again.