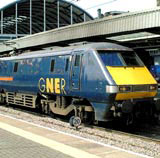 Train operator GNER is looking to redesign and refurbish most of its 270-strong fleet and some of its stations. It is also keen to order new trains, which will need the services of branding, interiors, graphics and product groups.

The train operator is understood to have approached a number of consultancies, but it says that no appointments will be made before the autumn.

‘We are looking at refurbishing the interiors of the current Mark 4 electric trains, which are at least ten years old and in urgent need of refurbishment. We manage 12 stations and want to refurbish some of these,’ a GNER spokesman says.

The operator won a two-year extension to its East Coast Mainline franchise in July, which takes it up to 2005, rather than the 20-year contract it had bid for.

That decision has delayed the operator from ordering new trains as the five-year lead time would mean that the trains would be ready to roll a year to two years after its franchise had expired.

A GNER spokesman says that it is busy trying to get its head around the Government’s two-year decision and that it wants ‘at least a ten-year extension to the franchise to get a return on any investment on trains’.

However, it is ‘hopeful’ of being able to place orders for new trains before the New Year and to appoint groups for the refurbishment work before or at the same time.

GNER’s visual identity was created by New York-based Vignelli Associates in 1996 and it has not worked with any British groups (DW 20 November 1996).

Don’t sit on your stool – you need the right tool

Pinochet jnr makes a toast to his father’s legacy