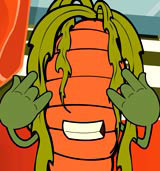 A group of amoral and lawless vegetables living in a mouse hole in a kitchen have been created and animated by Kerb for www.bravo.co.uk. The consultancy has produced ten four-and-a-half-minute episodes for the adult animated series, called Hellz Kitchen, for a fee of £55 000. The series launches on 13 August and is expected to eventually appear on Flextech Television’s Bravo men’s channel. The consultancy was appointed without a pitch. Hellz Kitchen follows the lives of vegetable and fruit characters, including Tyrone the carrot Ramon ‘Dirty’ Sanchez the chilli, and Lola the transsexual tomato with a veg/ fruit dilemma.

Compass shops around for cafés

Adjustable seating could take off inside aeroplanes