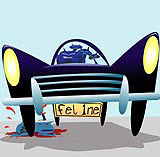 In some design circles, digital software Flash, by Macromedia, is simply a tool used to generate a proliferation of animated websites. Many are aware of its limitations, due to a multitude of sites with rotating toolbars, pop-up logos and cardboard animation – the signature of bad Flash. But even a fickle design audience could not blame the tool, because now and then they glimpse something Flash-fantastic and that has given them a clue to its potential.

That potential is to merge and redefine disciplines. Flash is, in essence, a tool for creating animated and dynamic websites, but, more importantly, it’s also the latest driver for the evolution of animation. As Macor PC-based desktop tools are maturing, digital media consultancies are creating and selling animated interactive designs in the way that they once built simple HTML page Internet sites. This has both excited and scared the traditional animation industry and has forced those who create, produce or commission animation to look at what’s happening over the digital garden fence.

One thing that is immediately evident is that Flash appeals to both pure animation and interaction design creatives. Like many other desktop digital tools, it is flexible enough to be used for a variety of purposes.

Steve May, a recent graduate of the Royal College of Art animation course, thinks that there may be no need for terms like pure animation any more. ‘I didn’t come from a traditional animation background,’ he says. ‘I can approach work in an interesting way without being too enthralled by tradition.’

May created animations Gut and Dawg using Flash, but ignored its interactive capabilities. ‘Flash is great because of the speed you can work. When you’re using it for output to video, you’re not constrained by the limitations of making it easily downloadable [on-line] so it’s quite versatile,’ he adds.

Although May’s work shows the hard-edge linework and flat colour traits of Flash, he overcomes the limitations of the package with strong visual characters and fluid sequences of entertainment. ‘It’s the quickness compared to traditional methods,’ says May. ‘If I had tried to make a similar film with traditional techniques I’d still be working on the thing next year.’

But speed here doesn’t save time, it increases creative time. ‘With Gut I wanted to make a big, grotesque and hopefully funny piece,’ May explains. ‘It started out far more experimental, with loads of different visual techniques and narrative threads, but I realised that this was obscuring the main thrust [of the film]. The temptation to go overboard visually, because the tools allow you to, is very strong.’

On the other side of this creative coin, interaction designers from graphic design or digital communication backgrounds use Flash as an interaction tool. Increasingly, it is leading them to animation work.

Freelance interaction creative Keith Marsh sees himself as a designer in an industry that lacks a dominant ideology. ‘My role, therefore, has always been relatively undefined,’ he says. Tools like Flash allow Marsh to blend animation into the vastly flexible world of interaction design. ‘I look very closely at the experience of the person interacting with my work. Clarity in presenting information, form and function is important, but the ultimate goal is to create an engaging, immersive environment. Playfulness is very important,’ he adds.

Creativity without clear categorisation allows Marsh to be an animator, a gameplay creator or an environmental designer at will. ‘Designers are no longer constrained by the size of the paper they are working on,’ says Marsh. ‘Digital media enables the use of animation and interaction beyond static visual forms of communication. We can now use movement and navigation within a visual space.’ His work with experimentalists Rom and Son shows the flexibility. Their interactive CD, RomOne, uses animation, sound and gameplay and is the basis for a series of interactive live performances.

What is also striking about multiple disciplines using the same tools is that the similarities start to impinge on the differences. The potential for cross-pollination is evident. That means graphic designers grappling with animation, animators becoming interactive designers and both exploring animated gameplay. This is driven by the fact that Flash is cheap and easy to use. Even better, designers can create finished work at home. Those of you that can remember the desktop publishing revolution can see a similar story emerging: there might be a dip in quality, but eventually new frontiers of creative flexibility will open up.

If desktop interactive tools like Flash seem to be affecting how creatives produce work, it also has an effect on both interactive digital e e design groups and the more traditional animation consultancies. Merlin Nation, senior designer at Digit, thinks that Flash is a great tool that can reduce production time for animation. ‘It has a multitude of uses, but is still only a tool – the idea is still fundamental. What something like Flash allows us to do is to introduce interactivity,’ he says.

Marc Craste, animator at animation consultancy Studio AKA, thinks digital media ‘has injected a spontaneity and sense of adventure into animation. Traditional methods have meant huge expense and lengthy schedules. With the advent of tools like Flash and the cheaper 3D packages, people can afford to experiment without sacrificing five years of their life and placing themselves in debt. The possibilities far outweigh any dilution of quality.’

In conclusion, Craste says, ‘The sheer volume of animation that is being produced independently ensures that every now and then something brilliant will surface.’

Enthusiasm in the studio has not been lost on company values and directives. ‘Paradoxically, our industry has shrunk and grown at the same time,’ says Studio AKA director Philip Hunt. ‘The numbers of classically trained animators working in traditional media has fallen, the numbers of assistants and ancillary support staff has dropped away, but the numbers of people creating digital animation, modelling, editing and compositing has grown at an incredible rate. Animators have seen technology catch them up to [such] a degree that they are more comfortable working in digital environments. The software is simpler, more powerful and infinitely more user friendly. But you still need an understanding of design, narrative, character, motion and timing to create engaging content, as well as animators with talent beyond simply being able to make something move.’

Digit sees animation as a way to enhance ideas rather than something to be promoted as a singular skill. ‘Animation is one facet of what we do,’ says creative director and co-founder Daljit Singh. ‘To some clients [animation] will be more relevant than others, but to most of our clients it’s about the whole package.’

There is certainly change and evolution brewing in creative circles, but will it have an effect on those separate marketplaces of traditional animation and the Internet? Hunt feels that the proliferation of commercial channels will mean that ‘media spending has to be allocated across many more channels than previously. So, budgets are down accordingly on the actual production of animation’. For Hunt, there could be a benefit. ‘If we can produce cost-effective, engaging content in a limited time span and with minimum human resources, then animation will be viable for on-line advertising,’ he says.

A new outlook for animation may also mean easier entry for customers who previously found animation inaccessible. This is an area that digital media groups compete in. ‘Some clients are becoming aware of the fact that to get great work you don’t necessarily have to go to consultancies/ studios traditionally linked with certain disciplines,’ says Singh. ‘A fresh approach can be achieved from a group that doesn’t have an established background in that media.’

Multiple commercial channels and new client bases may point to either the squeezing of animation budgets or the repositioning of commercial animation, and that is a green light for the creation of pioneering experimental work, to show what can be achieved. Innovative design can then be exploited for commercial reward. This probably suits small digital media groups that are used to digital evolution and experimentation. ‘We are only as good as our last project,’ says Singh. ‘This is often the client perception, so as we do more work in a particular area, including animation, we build credibility, allowing us to build on those relationships.’

This points to a future where animation production studios and interactive digital media consultancies may find themselves competing for the same clients. By then, they may find that incoming talent is already mixing pure animation and interactivity, because the tools allow them to do so.

Whatever the outcome, creativity will win because these technologies are quick, easy and accessible to use and play with. And that naturally excites designers and animators alike. Roll on evolution, I say.

The FA cultivates its grass roots

Deepend to cut costs as the market dives

Pinochet jnr makes a toast to his father’s legacy