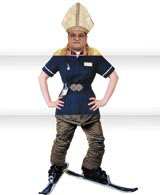 Blast has designed a series of ‘folded character’ posters for the BBC to promote its Costumes and Wigs department, which is celebrating 50 years of service to the film and television industries. Briefed to produced six posters that display the variety of costumes available, Blast drew inspiration from the game where paper is folded and different people draw the head, torso and body on each fold, creating a unique character.