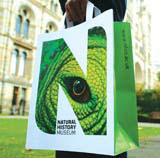 The Natural History Museum is to revamp its signage, as part of a long-term strategy to provide a more consistent and inclusive system across the grounds of its London site.

The projects to overhaul the museum’s internal and external signage schemes will usher in a fresh look for the museum. Traditional gallery graphics, such as numbers, will be replaced with names and pictograms, and the museum will be divided up into four colour zones.

Holmes Wood has been appointed to develop the exterior wayfinding and navigation solutions, following a two-stage pitch – held last year – that involved a credentials presentation, as well as a competitive tender.

The consultancy’s brief covers orientation, information and directional requirements. The designs will apply the museum’s Benchmarks award-winning brand identity, which was first created by Hat Trick Design almost two years ago, across the museum’s landscaped environment. Holmes Wood will also look at ways to install external landmarks, which ‘announce’ the building to the public. The scheme will direct visitors through two entrances and across a space where a series of open-air temporary exhibitions are regularly held.

‘The work will tie a lot of elements up together. We are currently looking at all levels of communication, to put everything together as part of a family, so it is all related,’ says a spokeswoman for Holmes Wood. The signage scheme will be installed this summer.

The Natural History Museum is also undertaking an internal signage redesign project, which it expects to install by May. The museum’s in-house team has worked up the designs, following a wayfinding strategy drawn up by the Information Design Unit of Enterprise IG. The aim is to rationalise existing wayfinding systems, boost accessibility for visitors and aid navigation around the museum. John Maillard, project manager at the Natural History Museum, is overseeing the initiatives.

Design at the Natural History Museum: