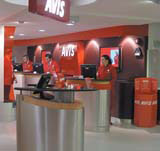 Avis Rent A Car is trialling a radical redesign of its traditional store format, scrapping its front desk mode of retailing, which could serve as a blueprint to rebrand its entire network of UK sites.

The first outlet to receive the makeover is located at Gatwick’s South Terminal Airport. The designs, which aim to create more interactivity between customers and staff, have been worked up by creative consultancy RDC Foley Cooke. A series of pods, which act as ‘virtual tills’, have been installed to replace the front counter, which is one of the most common design features used by car rental companies. Part of the strategy is to make better use of the retail space overall, where much of the back office area goes typically unused by the customer.

‘Traditionally, there was 20 per cent space for our customers and 80 per cent back office. This has now turned around, so the customer can enjoy 80 per cent of the space. The old car rental desks are boring. They form a barrier and are confrontational. When this comes down, there is a much more open-plan feel that is more intimate,’ explains Paul Lewis, Avis station manager at Gatwick Airport.

Avis is also trialling brighter lighting and plasma screens, as part of the interior redesign.

Avis would not comment on its roll-out strategy for the project, but it is likely that the designs will be trialled at further airport locations, before they hit the high street. Avis currently has 150 stores in the UK.

In its latest trading statement, released in December, Avis reported that revenue trends improved in the second half to date and were up on the previous year, mainly due to good volume growth in the leisure segment during the summer months. It expects net interest to increase by between €7m (£5m) and €10m (£7m) for 2006.

Avis is in the throes of implementing a recovery strategy, overseen by Murray Hennessy, Avis Europe Chief Executive.