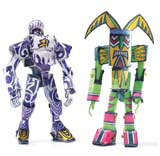 Tomohiro Yasui’s hand-crafted, paper warriors defy their delicate material and are designed to fight to the bitter end – like an origami Ultimate Fighting Championship. John Stones separates the fantasy from reality, ahead of Yasui’s first exhibition outside of Japan

Aged ten, Tomohiro Yasui made his first paper toy fighter. That was some 20 years ago and, since then, some 200 paper warriors have been created, fought intense battles, and had their combat damage repaired to fight another day.

The Kami-Robo, as they are called, are a quintessential manifestation of Otaku geekdom. And, while the nature of Otaku is usually to be obsessively private, Yasui’s solitary fantasies and creations have found a wider following and gained cult status in Japan.

Though Yasui refers to them as robots, the 15 to 20cm-high paper figures depend on manual manipulation of their moving shoulders, hips, elbows, knees, wrists and ankles. Their lengthy fights, which are staged and filmed on a miniature wrestling ring, are recorded in fanatical detail on Yasui’s website, www.kami-robo.com, together with the mythologies and legends that have evolved around the different characters, which sport names such as Madroneck Sun, Hurricane Rock and Fierce Deity. Their battles are intended as a private reflection of the wider conflicts taking place in the real world, beyond their fantasy stage.

This unique cast of figures are now set for their first show outside of Japan, when some 100 figures and associated paraphernalia will be displayed at London’s Institute of Contemporary Arts in April. The exhibition will also be accompanied by a retrospective of Butterfly-Stroke, the influential Tokyo animation studio set up by Katsunori Aoki, who discovered Yasui and realised the commercial potential of his paper warriors, such as plastic toy versions.

Kami-Robo Expo 06 and the Butterfly-Stroke Retrospective run from 8 to 23 April at Institute of Contemporary Arts, The Mall, London SW1