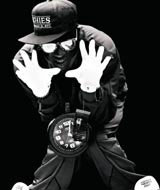 Hip Hop stars have a lifestyle and image that is almost as colourful as the profanity that peppers their music. Mark Suroff, Matthew Dean and Derek Axelrod have captured the top 100 stars of hip hop – in all their hard-hitting glory – for a mammoth coffee table book and exhibition.

But buy the book for the images, not the words: the design is chaotic, reminiscent of the early 1990s Ray Gun style. Copy is mere decoration – it is set at odd angles; leading is so tight the letters are squashed together. If you stop to try to read a page, don’t pick the one about MC Hammer, unless, of course, you’re a fan of the man with the worst trousers in rap.

These are supposed to be the 100 greatest stars in hip hop, but the criteria by which these artists were chosen is a bit populist: record sales, on-line voting, media profile and quality of photography. Are the best artists in hip hop just the photogenic ones who make the most money and sell the most records?

Portrait photography at its best can reveal much about the subject’s character, but unfortunately almost everyone in this book is too impassive to give anything away. There’s too much emphasis on moody shots of rappers with the same stereotypical rude boy paraphernalia. Nitin Vadukul spices things up a little when he makes Eminem up to look like Pinhead, a character from cult horror flick Hellraiser, but the rapper digs out a butch prop for his next forage through the pulp horror wardrobe: an angry battle cry inspired by the Texas Chainsaw Massacre.

Monotonous images of rappers glaring malevolently at the camera are broken up with a few inspired gems: the three humble heroes that comprise A Tribe Called Quest are captured in all their understated glory by Mark Seliger; there’s no hostility in their gaze, they look like the sensei grandmasters of hip hop.

For sheer visual intensity, Seliger’s shot of Ice T staring poker-faced out of a broken window emblazoned with the stars and stripes is hard to top – it looks as if he’s just punched a hole in it.

David LaChappelle brings light relief in his sumptuous bubble gum portraits of The Beastie Boys and Lil’ Kim; they are a riot of oversaturated colour. The Beasties, dressed as fast food staff, pull their usual schtick, striking wild poses. It is one of the few laughs this book has to offer – it would be a lot funnier if it had some images of playful stoners like The Pharcyde.

Hip hop isn’t always hostile and confrontational, it’s at its most insightful when it is poking fun at the macho posturing of its stars. Hip Hop Immortals Volume One is a feast for the eyes, but it does seem to gloss over this essential point.

Try to not get the wires crossed