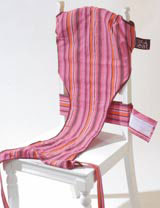 The cream of Scottish design and architecture was commended at the Scottish Design Awards 2005, held in Glasgow last week.

Local design consultancy Stand shone brightly in this year’s accolades, picking up five awards and three commendations. These include the special prize of Chairman’s Award for Design, which recognised the consultancy’s Font Presenter experiential and print work for Tennent’s Lager. Stand creative director Stuart Gilmour, who led the Tennent’s design, also won the Designer of the Year award for the second time.

‘On the design side, things are going through change here. There has been a lot of activity in terms of new consultancies springing up,’ he says. ‘In the awards, the architectural element is getting larger and better, and there’s a more even balance between architecture and design, which is a healthy thing.’

A ‘washable squashable’ high chair for babies took the Grand Prix and also won the Product Design category. Launched last year, the Totseat was commended by the judges for its ‘superb combination of form, function and all-round design excellence’. Following its success at the awards, Edinburgh company Totseat plans to expand its reach across Europe.

Graphical House’s Fieldtrip Guidebook for Glasgow design and architecture centre The Lighthouse won the Publications award. The consultancy also won the Promotional Literature section for its designs for The Scottish Show, held at The Lighthouse last year.

There was no winner in Packaging Design, although Good Creative received a commendation for its Lads & Divas work for whisky distiller Whyte & Mackay.

‘It’s an interesting time for design in Scotland,’ says Gilmour. ‘Personally, I think standards are slipping a bit up here, despite what everyone says. But creative output goes through peaks and troughs, and things are looking like they’re going to improve at the moment.’

Initially a small section of the Scottish Advertising Awards, the Scottish Design Awards became a separate entity in 1998 and is organised by Carynx Group, publisher of The Drum and Prospect. The awards have expanded to incorporate building and environment design, and claim to be the largest annual design event outside London.