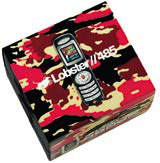 Virgin Mobile is launching Lobster this week, its first own-brand series of phones, with an identity and packaging created by its in-house team.

While many network operators co-brand handsets with the major manufacturers, few have replaced handset brands in this way, and Virgin’s move is likely to shake up an increasingly competitive market.

The Lobster collection targets 16- to 30-year-olds and forms part of a ‘long-term project’ to create a Virgin sub-brand. Senior designer at Virgin Mobile, Adrian Spooner, is overseeing the initiative.

Virgin is planning to create distinct ‘personalities’ for each phone and to ‘get more involved in the manufacturing of the handsets’. This could pave the way for Virgin itself to design its products.

‘This provides an opportunity to get decent, well-designed handsets at an affordable price. I was keen on creating a brand that had a youthful feel to it, but didn’t come across as elitist,’ he adds.

The debut phone is the Lobster 485, which Virgin claims will be one of the smallest flip handsets available in Europe. The handset has a brushed steel effect with black trim and is manufactured in South Korea. The packaging is a camouflage design, which may change for other phones.

‘At the moment it is a bit of an unknown. We are feeling very positive, however, about the future designs,’ says Spooner.

Virgin expects to launch another phone in the collection before Christmas, with an extended roll-out for 2006.

Spooner says he is keen to develop Lobster as a ‘good youth brand’ and possibly branch out to fashion.

The Lobster brand name was inspired by Salvador Dali’s iconic Lobster Telephone: ‘It is a great sounding word, youthful and quirky,’ says Spooner.

The Virgin Mobile design team started work on the branding in April ‘adhering to tight timing for the June launch’, says Spooner.

The Lobster 485 launch will be supported by point-of-sale, on-line activity, and a possible road show. It will be available in all Virgin Mobile stockists.

â€¢ Virgin Mobile is majority owned by Sir Richard Branson’s Virgin Group. Since launching in 1999, it has attracted more than 5.3 million customers.

â€¢ Virgin Mobile tripled its revenues in the past three years, according to chief executive Tom Alexander.