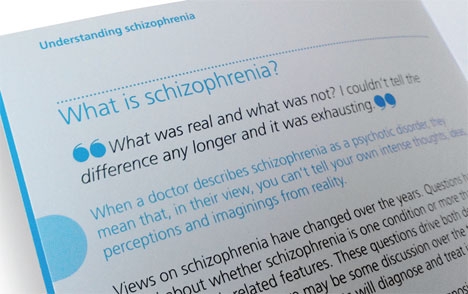 Interabang has redesigned a suite of booklets for mental health charity Mind that explain conditions to suffers.

The consultancy was set up in August 2010 by Adam Giles and Ian McLean, who met while working at Hat-Trick Design.

Interabang was appointed in February after Mind’s marketing director picked up the annual review that the consultancy worked on for homelessness theatre charity Cardboard Citizens while at a performance, says Giles.

The brief was to create a template for the Understanding guides that brought the range together in a coherent and friendly way.

Previously, individual illustrations were commissioned for each of the suite of booklets, meaning there was little unity across the set. It was also thought that illustrations that tried to depict mental health conditions may have been distressing for users, says Giles. He adds, ’Previously, [Mind] had to reinvent the wheel for each booklet, and someone at Mind would have to approve the new illustrations. We wanted to take out as much decision-making as possible.’

The cover for the new booklets features two overlapping circles, one holding the Mind logo and the other naming the condition, to show that the guide expresses shared knowledge and is about a two-way conversation, says Giles.

The cover system is consistent across the range, with a different coloured roundel used to distinguish each illness. Inside, Interabang introduced a ’hero’ paragraph, which sums up what the booklet is about, and a contacts section, which is typographically more like a directory than the rest of the book and is printed on different stock.

The first three booklets, which explain schizophrenia, post-traumatic stress disorder and obsessive-compulsive disorder, will be rolled out this month.