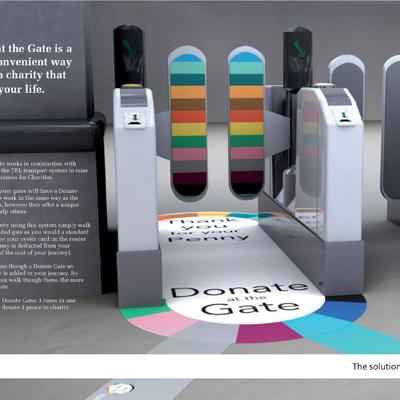 The Royal Society of Arts has announced 15 winners for its 2011 Student Design Awards including a printer that turns e-mails and text messages into physical letters and a system that allows Oyster card users to donate to charity at Tube entry gates.

The Student Design Awards, formerly known as the Design Directions awards, are announced every year by the RSA. This year’s briefs aim to tackle social issues including sustainability and ageing.

The RSA says the relaunched Student Design Awards ’have brought renewed focus to the importance of design craft and ingenuity’. The new briefs feature a Scope section, which enables students to develop ’practical, tangible’ responses.

The 15 winners across eight different briefs were chosen from nearly 600 entrants. The RSA says the entries came from more than 65 colleges around the UK as well as institutions in Europe and Asia.

Joseph Coleman, from the University of Plymouth, developed a letter printer that receives e-mails and text messages from loved ones in response to the Modern Age brief, which asked how the design of living spaces can make growing old seem more attractive and inviting.

Stuart Kench and Helen Parry of Kingston University have developed the Donate at the Gate system (pictured), which allows Oyster card users to donate to charity. The design is in response to the Giving and Getting brief, which asked participants to use design to invoke need and inspire generosity.

The other briefs were: Double Duty Devices, Make Something Disappear, Conflict Resolution, My Favourite Subject, and Action for Age.

Interabang shows its understanding of Mind