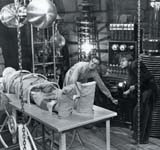 I would secretly sit, eight years old, in the TV room of my family’s house in New Jersey and watch 1930s-era Universal Pictures horror films on WPIX. Dracula, Wolf Man and The Invisible Man would keep me up to the wee hours. But no film captured my imagination more than Frankenstein.

Everything about it was memorable. The sets were sensational – cavernous spaces filled with all manner of scientific kit. The make-up effects were superb. And the story’s central theme of infusing dead objects with soul was a compelling fantasy. It was a theme that I would return to many years later.

The Future Terminals project was commissioned by Nippon Telephone and Telegraph from Sottsass Associati (where I worked at the time) as a piece of design research on the future of telecommunications. We wanted to imbue the technology with new behaviours. We wanted technology that would ‘live’ in its interaction with us. The specimen jars in the exhibition added to this effect.