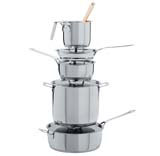 Jasper Morrison has designed the debut collection for A di Alessi, one of two new Alessi sub brands being launched by the Italian-based manufacturer, as it seeks to boost sales and target more specific groups of consumers.

The identities for each of the separate product categories has been designed in-house, but Alessi’s chief executive, Alberto Alessi, is keen to stress that the brands ‘reflect three different expressions of the same corporate identity’.

He adds that the move to create the three variations of the main Alessi brand is a ‘further step forward’ for the company. The intention is to appeal to its broader client base, which has grown throughout the 1990s.

Industry stars, such as Richard Sapper, Stefano Giovannoni, Toyo Ito, Ron Arad and Peter Zumthor, will launch products throughout the year under the three different sub brands, as part of Alessi’s spring/summer collection.

Morrison’s Pots & Pans collection is the first range of products to launch under the A di Alessi brand. It comprises 26 cooking items, including casserole dishes and frying pans. These feature a wide internal radius on the base and a flared rim to aid the pouring of food and liquids.

The lids have specially-designed handles, made from three strips of folded steel, fixed at 120 degree angles, which allows the lid to be lifted and turned upside down using a wooden cooking spoon. Various products, such as the milk boiler, come with graduated measures on the inside wall, to aid the measuring of liquids.

Jasper Morrison has also created the identity and packaging for the collection, which includes a simple drawing of a chef’s hat as a marque. Morrison says he intends to add more pieces to the collection over time.

He first began working on the project about nine months ago. ‘I really enjoy cooking. The invisible areas within the products are important as they make for effective use. For example, the handles have been designed to let heat through,’ he explains.

The Pots & Pans collection launches later this month, says a spokeswoman for Alessi.

• Exports 65 per cent of its sales to over 60 countries

• 14 flagship stores located around the world