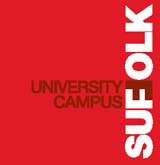 The £150m initiative will create a space to service the higher education needs for the Suffolk area, but will not form an independent university organisation.

The project, in part, aims to reverse the brain drain of Suffolk school leavers who study for degrees elsewhere and then settle in the region where they studied. The unique nature of this type of venture generated an unusual branding exercise for Lloyd Northover, says Jim Bodoh, director at Lloyd Northover.

‘We had to figure out a form of words that didn’t imply this was an independent organisation or that the organisations were merging. They will both continue to exist in their own right, but have deployed resources to create a third entity. It is a very bold, innovative idea and we created naming, as well as advising on its proposition,’ says Bodoh.

He describes the identity as ‘relentlessly bold and modern-looking’, explaining that the interlocking letters reflect the nature of relationships between the joint partners, its students and the surrounding area. Lloyd Northover creative director Jeremy Shaw designed the visual identity.

Lloyd Northover is currently developing brand guidelines and is designing the organisation’s first prospectus. The identity was unveiled to the public last week.

The Ipswich campus will take its first students in September 2007. Bob Anderson, pro-vice-chancellor of Sheffield Hallam University, is heading it.