Not so long ago it was only in sci-fi novels, by the likes of William Gibson and Bruce Stirling, that heroes and heroines traversed the globe with just a laptop, cell phone and Palm Pilot in their hand-luggage – all ‘blue-toothed’ and ‘wiffy’. These days, though, global nomadism, facilitated by digital technology, cheap airfares and the growth of the European Union, is a real-life choice for creatives, especially for those working in one particular field – illustration.

Currently the one to watch when charting new trends in image-making, the mania for all things illustrated took off in the mid-1990s,  with the end results being displayed across all media – in design, advertising, animation and fashion. But, as well as actually ‘visualising’ the zeitgeist, today’s young illustrators are rewriting the creative industries’ ‘how to’ career guide. Thanks to new levels of digital connectivity, it is possible to live, work, be commissioned and deliver the goods anytime, anyplace. And with illustrators embracing the computer, not just as a communications device, but as a means of production, more of them than ever are incorporating travel and emigration into their practice – by sampling lifestyles, collecting visual data and remixing graphic languages.

Illusive, published by renowned Berlin-based trend-spotter DGV, is crammed with the cream of contemporary, ‘directional’ (to borrow a word from fashion) illustration, culled from practitioners living and working around the world. Illusive aims, unlike many survey publications, to provide a context for the work, which it does by grouping contributions into categories – such as Rock and Roll, Urban and Vector – making connections between materials, media and the aesthetic outcome. Also included are a number of interviews with a cross-section of rising stars.

What is evident from the recollections of the majority of illustrators interviewed is that they have at some time or other been creative nomads; relocating to be educated, formally or informally, to break into a particular industry (for instance, Paris for fashion, Los Angeles for film titles), or to a cultural hotspot (London, New York, Barcelona), where chance encounters with like-minded individuals lead to inspiration and collaboration.

One such illustrator who went in search of ‘where it’s at’ is Benjamin Güdel, known for his virtuoso comic-book style, combining vigorous brushwork, intense colour schemes and dark emotions. ‘I’ve always drawn, since kindergarten,’ he reveals. After studying in his home country of Switzerland, he left for Berlin after the fall of the Wall, which had subsequently become a haven for creative individuals, who were able to live, work and play cheaply in a city that was reinventing itself. ‘I hung around Berlin for two years, becoming an underground comic illustrator,’ he explains. Back in Switzerland, Güdel admits to needing ‘my studio, books and reference materials around me. I work by hand – the computer isn’t an important tool for me, so I can’t simply sit in an anonymous room and do creative work. But that experience in Berlin readied me for a career in illustration’. 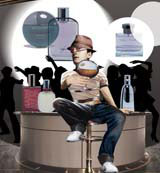 The global trend is evident closer to home. The University of Brighton’s current illustration course has students from Japan, the US, Singapore, Norway and China, but programme leader Lawrence Zeegan says there is no pressure to accept quotas of overseas students, who pay higher fees.

Japanese illustrator Yuko Kondo lives in London, having travelled to the UK to attend Central St Martins College of Art and Design and the Royal College of Art. Kondo explains, ‘If I had gone to college in Japan, I would have met only Japanese students, but here I met many people from different countries with different culture – lots of cultures mean lots of ideas’. Kondo also admits, ‘There are more big career chances in the UK.’

Signed to the London-based agency Pocko People, an off-shoot of Pocko, publisher of small, but perfectly formed artists’ books, Kondo has produced a collection of illustrated stories, entitled Too Fat, Can’t Fly, which he describes as a ‘blend of New York City, Tokyo and London street cultures’. Feeling much like a glimpse into Kondo’s private sketchbooks, Too Fat, Can’t Fly features cuddly, but flawed (read chubby) hybrids of superheroes and pets, including ‘a love-struck mutt called English’.

Founded by creative nomad Nicola Schwartz, who originally came from Italy to study photography at the RCA, and now has offices in Cape Town, London and Milan – Pocko People, unsurprisingly, has a very cosmopolitan outlook, representing artists from South Africa, Argentina, Brazil, Japan and all corners of Europe. The agency has an equally disseminated client list, which Schwartz attributes partly to ‘the nomadic nature of our artists and partly to our publishing programme, which has worldwide distribution. We have an international client list, from Marc Jacobs and Borders in New York, Vogue Japan and Commes Des Garçons in Tokyo, to Barclays, Sony and Coca-Cola.’

When asked about variations in how international clients work with illustrators, Schwartz identifies the illustrators themselves as bringing diversity to the mix. ‘It always fascinates me how artists reinterpret their own cultural references in their work, even when they have immigrated or are working for clients in different countries. On the other hand, clients are often concerned with the specific “needs” of their consumers, often in a stereotypical way.’Having travelled and studied abroad, Maren Esdar is now aware of the globalising influence in her chosen area of illustration, working on editorial and advertising commissions for fashion and beauty clients. A collage artist who works with Pritt Stick and Photoshop, Esdar reconfigures images culled from magazines. She reduces the colour range to glamorous, glowing tones and disrupts the perspective and the picture-plane. The final results are seductive and glossy, but unsettling.

Now based in Hamburg, Esdar has lived in California, Paris, London and Cologne, and has studied fashion and art history. Travelling allowed her to ‘gather new experiences, learn about myself and feel what it’s like to be an alien’. Having had first-hand experience of two of the world’s ‘fashion capitals’, Esdar notices a cultural homogeneity within the fashion industry. ‘The global launching of high fashion campaigns has led to a universal sense of aesthetic understanding. Most agencies and media seem independent from where they are located, sharing the same fears and pressure,’ she says.

Another illustrator with a number of fashion clients, Deanne Cheuk, studied in her hometown of Perth, Australia, but now works in New York, producing ornamental, ethereal images that combine pattern and figure-drawing. A major difference in how work is commissioned prompted Cheuk to become her own boss. ‘In Australia, you do a lot on your own, from start to finish of a project, whereas in the US, people are assigned to work on a project each step of the way,’ she explains. Her antidote was to self-publish Neomu, a magazine and platform for fellow creatives, which has raised the profile of all involved. 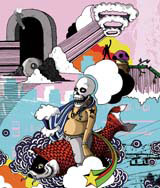 ‘Doing-it-yourself’ seems to go hand in hand with the nomadic experience. Prompted by meeting likely collaborators, and the need to generate income prior to the commissions coming in, illustrators have become publishers, musicians and fashion designers – and it’s often those independent projects that first get them noticed.

After two years working in London, Vault49, made up of Jonathan Kenyon and John Glasgow, left for New York – the city often seen as the Holy Grail for creative nomads. ‘We travelled for pleasure and the work followed,’ Kenyon explains. The duo took with them their successful T-shirt brand Roule, which is now on sale on both sides of the Atlantic. With celebrities, such as Usher and Ludacris, as walking billboards for Vault49’s design aesthetic, it has attracted a formidable list of fashion and lifestyle-based clients, from MTV to Microsoft, Nike to Greenpeace.

For Vault49, New York offers greater opportunities. According to Kenyon, ‘The concept of “illustration” is evolving. We are image-making graphic designers, and actively seek to get our hands dirty in all areas of design. It’s what makes us an attractive
company here in New York. If we aren’t right for a job, we know the people who are. It’s not about working in isolation. Plus, we seem more prepared than most in New York to experiment and be creative with our materials and our business plan.’ He may miss London’s ‘stronger design subculture’, but the bottom line is, ‘In New York,
if you do well and market yourself hard, you seem to get noticed.’ It’s true that being the new kid on the block has a certain amount of exotic cachet to it.

A fact that’s been echoed by other designers and agents is that bigger fees come from clients with bigger brands. ‘Understandably, US companies feel happier dealing with US-based designers,’ Kenyon explains. ‘They perceive there to be less risk. There seems to be the idea here that if something is worth having, it’s worth paying for.

Being present in New York has opened us up to clients from the huge domestic market that would never have commissioned us from London,’ he adds.

There’s a certain amount of risk involved in nomadism; Kenyon says if you fall out of favour, ‘New York is brutal, but that’s refreshing.’ But there is risk in any career move, and it needn’t be forever.

Illusive: Contemporary Illustration and its Context is published by Die Gestalten, priced at £33