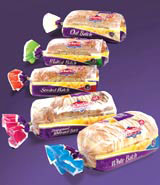 Blue Marlin has created an identity and livery for the speciality batch breads of independent bakery Warburtons, which go on shelves this week.

This is the final phase of a major brand overhaul that began with wax-wrapped breads and progressed to farmhouse breads and rolls,’ says Blue Marlin managing director Andrew Eyles.

Blue Marlin has created the identity and packaging for two new bread varieties, Oat Batch and Malted Batch, as well as for three existing varieties.

The brief was to create an identity that bridged the gap between conventionally wrapped bread and in-store baked bread, Eyles comments. ‘Consumers want breads with more variety, taste and texture,’ he says. ‘This has led to a more crafted appearance; a bread with a twist.’

‘Consumer feedback suggested the branding was not as strong as other ranges,’ says Warburtons brand manager for new product development Vanessa Railston.

The dominant maroon colour of the Warburtons identity is retained, and each bread variant is paired with another secondary colour.

The consultancy has been Warburtons’ principal consultancy for two-and-a-half years, after taking over from previous incumbent Dragon in December 1999.

Blue Marlin worked in conjunction with Warburtons’ in-house innovation teams on the project.