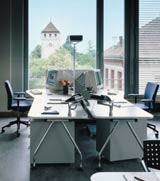 This year’s Spectrum exhibition sees the launch of an array of new products, from wall-mounted bars to enclosed chairs for mobile phone users and from designers such as Michael Sodeau and Ross Lovegrove.

But it is designers addressing office environments and how they can be improved, rather than creating individual products to sit within those environments, who are breaking the newest ground, says Spectrum founder David Field.

‘Designers are not asking enough questions,’ he says. ‘They are accepting briefs from manufacturers rather than questioning principles.

‘[Designers] should be analysing how an office environment works, how it could develop and how to make working conditions more humane. It is only once these questions have been posed that new aesthetics in furniture design can form,’ Field argues.

David Field cites Volume Product Design’s Mark Partridge’s wireless mobile office, PODV-01, which is launched at Spectrum this year, as an example of the sort of sociological approach he believes designers should be taking.

It is run on charged power cells, designed to leave the unit free from any power and data cables.

Ross Lovegrove is introducing his public seating unit for Spanish company BD, designed for use in a host of spaces from streets to gardens to hotel foyers and shoe shops.

The large unit, Diez Plazas, seats ten people and has the fluid form of a sculpture. It can be filled with either water or sand to stabilise it, according to its location. And it can be stacked to make it easy to move around.

Michael Sodeau has created a Wing meeting table, credenza and cabinets for Windmill Furniture, which has evolved from his Wing range of cabinets for Isokon Plus in 1999, also manufactured by Windmill.

Currently still in the design stage, Wing will be similar in styling to the Isokon unit.

The rotating Silence ‘easy chair/ phone box’ can be used in waiting areas at concert halls, department stores, conference centres, reception areas and airports, according to its manufacturer. Look out for it in the forthcoming James Bond film, Die Another Day.

Aktiva is introducing a selection of pendant lights to Spectrum. Products shown include Icelight by Aktiva in-house designer Peter Christian, available with opal or coloured shades, and Tom-Tom by Jeff Tucknott, which features a coloured Perspex ring in its centre and can be hung whole or in two parts.

Richmond is launching its flexible desk system, Beyon, at this year’s show. Created in-house by Stephen Philips, Beyon is designed to be used by companies that need to change teams at great speed. It claims to have a simple assembly method.

Designs launched in the UK at Spectrum since1992

Aeron chair, designed by Bill Stumpf and Don Chadwick for Herman Miller, launched at Spectrum in 1994. Designed to combine comfort, ergonomic performance and aesthetics, the Aeron is created in three sizes to adapt to people of different weight and shape working on the principle that ‘one size of chair cannot fit all’. It also allows the user to adjust the seat, as well as the arm rests up, down, sideways, forward and back.

Ad Hoc System, designed by Antonio Citterio for Vitra, launched at Spectrum in 1999.

Tolomeo desk light, designed by Michele De Lucchi and Giancarlo Fassina for Artemide, launched at Spectrum in 1992. The Tolomeo has undergone several transformations since its launch and is now available in forms including the Tolomeo mini and the Tolomeo micro.

Filo and Search lights, designed by Peter Christian for Aktiva, launched at Spectrum in 1993.