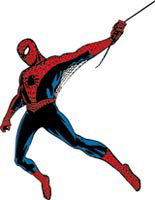 It has taken 40 years for Spider-Man, the most enduring of all comic book superheroes, to reach the big screen.

While his fantastical rivals Superman and Batman made the successful transition to 3D in the 1980s and 1990s, Spider-Man has proved more problematic. However, the rapid development of computer-generated imaging in recent years has made it possible to achieve special effects that were only dreamt of a decade ago. Spider-Man makes Superman look a slouch.

In the original strip, which first saw the light of day in 1962, artist Steve Ditko had no problem illustrating this unlikely and troubled superhero clambering up skyscrapers and zapping across the rooftops.

But potential film producers always knew a live-action version would be fraught with technical challenges. Indeed, one third of the £110m budget on Columbia-Tristar’s movie, due for release in the UK on 14 June, went on special effects.

The look that visual effects designer John Dykstra wanted was gritty, no-tricks reality, neither stylised nor comic bookish. ‘I knew we were going to have to create a virtual environment,’ said Dykstra. ‘The question then became, how realistic can we make it look?

‘We had to be able to move the camera with complete impunity through the spaces above the streets of New York. We needed to take the character to places we couldn’t humanly go. After all, Spider-Man can land on a vertical wall and stick, moving his elbows and knees into positions humans cannot achieve.’

Dykstra persuaded colleagues to assume some of Spider-Man’s more contorted positions in order to simulate them digitally. ‘We had a guy swinging from rings to discover whether or not we could convert that into swinging from web to web, then our animators reproduced the same poses and movements on computers.’

When nerdy science student Peter Parker morphs into Spider-Man, his senses undergo a parallel transformation, giving him a 180-degree field of vision, compared to the human being’s modest 90 degrees.

As Parker’s ‘spider sense’ kicks in, he is able to isolate any threats there may be in his path. The baddies are brought into sharp focus as whatever action is taking place elsewhere is reduced to slow motion.

A digital system called photogrammetry was used to create whole sections of New York in varying degrees of detail. This enables Spider-Man and his arch-enemy, the Green Goblin, to give chase at speeds and altitudes that leave you feeling dizzy.

It is all a million miles from the modest comic strip created by writer Stan Lee and illustrator Ditko 40 years ago which their boss at Marvel Comics told them would never work because a) superheroes don’t have personal problems, and b) everyone hates spiders.

The redoubtable Lee, who still writes the Spider-Man strip at the age of 79, was undeterred. He handed his idea and storyline to Ditko whose highly stylised illustrations suited Lee’s concept of the hard-luck kid with an unusual line in self-transportation. ‘Ditko’s version of Parker looked like any average teenager, thin, gawky and somewhat awkward, which is just what I wanted, someone with whom the average comic book reader would identify, a typical high school kid,’ says Lee.

Like Dr Banner aka The Incredible Hulk, which Lee had created a few years earlier, Parker aka Spider-Man clearly had some problems with his alter ego, even though his arachnid self was only embodied in the cause of good.

Thanks to Spider-Man, Marvel Comics sales in the early 1960s increased by £5m in one year, and those now owning the earliest strips, included in Marvel’s Amazing Adult Fantasy series, is sitting on a small fortune. It went on to be syndicated in 500 newspapers worldwide and remains the longest-running superhero strip.

In his forthcoming autobiography, Lee admits that he and Ditko have had a long-running niggle over attribution. Because of Lee’s high profile – he is the public face of Marvel – he has been widely credited with the creation of Spider-Man, which understandably upsets the man who gave him form.

Lee tries to make the peace by paying tribute to Ditko’s ‘important contribution’ and settling for the compromise ‘co-creators.’ It may all seem rather petty, but then comic book art is becoming increasingly saleable and collectable. Like many other aspects of 20th century pop culture, it has undoubtedly become a force to be reckoned with.

The film is not the only tribute to Spider-Man. Comics Creators On Spiderman, by Tom Defalco, published this month by Titan, takes a look at the artists and writers who work on the strips themselves.

Just as Dykstra’s colleagues recreated Spidey’s swing, self-confessed ‘frustrated actor’, Marvel illustrator Sal Buscema reveals that he, too, acts out the more difficult facial and bodily contortions of his characters in front of a mirror to achieve a lifelike effect.

Working on a comic book, Buscema e e lays out each page in his head before he begins work.

‘I have to know exactly what I want to do before I actually start drawing. Lee always wanted scenes to flow effortlessly from panel to panel. The reader shouldn’t have to wonder what’s happening in a panel. It’s the artist’s job to show him.

‘It takes a lot of effort to draw in comic book mode. When you’re doing an illustration for an advertisement, you get a couple of models, shoot some photographs, pick out the ones you like, and start drawing. You can’t do that with comics. You have to learn to draw from your imagination, or you’ll never be able to draw Spider-Man swinging through the city with that creepy body language.’

Somerset-based Mark Buckingham has been drawing Spider-Man and Batman for Marvel comics since the mid-1990s.

‘I grew up on Marvel and I had this paper Spider-Man mask as a kid. He was this geeky teenager who had all these issues he had to deal with. He was incredibly powerful and capable on one side, and yet so vulnerable in his normal persona.’

Buckingham says he prefers ‘the classic Marvel layout’ of the three-tier grid with two panels per tier, eschewing the fashionable notion of zigzagging across the page, or ‘trying to dazzle the reader with fancy layouts’.

That said, he is not averse to the odd modification when it suits him. ‘I’m always looking for ways to improve my version of Spider-Man, it’s an ongoing process. In my second year on the book, he became leaner-looking and I took a slightly more classic approach to the mask.

‘I want to do a comic with a certain bounce to it, so I have allowed a certain cartoon-like rubberiness into the way I draw. I’d like to think I am producing something that is sort of classic and timeless.’

Ron Frenz, another contributor to the Titan book, had an original way of ensuring that his drawings were comprehensible. ‘When I was still living at home I made my poor mom look at every job and ask her questions about the story. If my mom could tell what was going on, I knew a comic fan could.’

Spider-Man is just the first of a raft of superhero movies due for release in the next three to four years. To come are The Incredible Hulk, courtesy of Ang Lee, director of Crouching Tiger, Hidden Tiger; Dare Devil; Ghost Rider; and Wonder Woman.

One explanation of this glut is that the current crop of top Hollywood executives and creatives grew up on Marvel comics, including Sam Raimi, director of the Spider-Man movie, whose parents hired an artist to paint Spider-Man on his bedroom wall when he was 12 years old.

No doubt by the end of this year, walls the world over will be similarly adorned. m

Supply and demand in the graphic design business