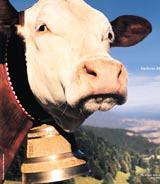 Paul Murphy was commissioned to shoot a Waitrose campaign by the supermarket’s ad agency Banks Hoggins O’Shea. An FCBA portrait photographer by trade, Murphy tried to instil some character into the cow. The shot was to be used as a press campaign for Waitrose’s unpasteurised Mont D’Or cheese. ‘The logistics of shooting a cow are difficult,’ says Murphy.

On arrival, the team had to find a dramatic location within a relatively undramatic region, source a Mont Belliarde cow after doing a ‘casting’ on six farms, then transport the chosen ‘model’ to the right landscape.

‘The cow was stupid and more interested in eating grass,’ says Murphy. As it would not keep still, the farmer had to stand behind it, holding on to its collar. ‘Compositionally, there were similarities between shooting the cow and doing portraits. Shooting the cow definitely had an effect on me,’ says Murphy.