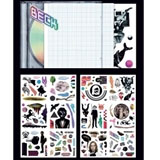 Tappin Gofton’s design for Coldplay’s X&Y album, with its cryptic, binary-code graphics, gave record-cover art a rare excursion on to the news pages last year. But the artwork for the band’s previous album, A Rush of Blood to the Head, holds an even rarer honour. Created by Norwegian photographer Sølve Sundsbø, under the art direction of Blue Source, it’s the only UK-produced cover from the past five years to feature in the Battle of the Album Covers film, viewed by well over half a million people on YouTube in the past month.

What does this mean? Well, it echoes a feeling, both within the design community and among consumers, that the sleeve art of today is broadly neither as memorable nor as creative as it once was.

‘Sleeve design isn’t what it was,’ says Rob O’Connor, founder and creative director of Stylorouge, which this year celebrated 25 years in the business with number one albums for Morrissey, Westlife and Pink Floyd’s David Gilmour. ‘It will never again have the kind of kudos it had when I was a kid, when it was exotic and you were buying into a fantasy world,’ says O’Connor.

So what’s happened? Does no one care about producing good designs anymore? Far from it – the flow of eager design graduates coming into the music business has never dwindled. Is it the fault of a migration to downloads, then? Well, to some extent, though the British recorded music industry is still worth almost £2bn a year, of which just 3 per cent is accounted for by download sales, according to recording industry body IFPI. Certainly, the record industry’s diminishing margins have left smaller budgets for label-art departments to play with, at a time when a safety-first marketing approach dictates that most albums’ sleeves advertise their contents as clearly as possible. O’Connor believes such strictures diminish the consumer experience. ‘There is no fantasy in an overly retouched picture of Beyoncé,’ he says.

A straw-poll of specialist music designers notably fails to yield more than a tiny handful of favourite contemporary designs and, even though record covers need to work hard nowadays, in both the physical and digital space, there is no real sense of a music industry revelling in the opportunity.

‘It is potentially a very interesting time at the moment,’ says Gerard Saint, creative director at Big Active. ‘More so than a year or two ago, people are realising how downloads versus physical products deliver completely different things, and there is probably a market for both.’

Over the past decade – and particularly since the rise of the Internet as a music distribution channel – the future of the record sleeve has seemed at various points to be in genuine peril. ‘There was a period when record companies really weren’t quite sure how to approach the Internet and the value they attached to a record sleeve seemed to diminish,’ says Seb Marling, creative director at Blue Source. Most music specialists took the hint and diversified into other sectors and other disciplines, most notably video. As it happens, CD sales have not nosedived and the album cover is no longer as threatened, but no one is ready to suggest that this is any kind of golden age.

‘A record sleeve, these days, doesn’t represent any more than a marketing campaign that gets applied across different media, but [record companies] do still need something to work with,’ says Marling.

The arrival of colour screens on music players has given the record sleeve a little more value on-line – a new version of iTunes lets users flick through sleeves as though they were thumbing through a record collection. There is still room for experimental design off-line too, although sneaking it past marketing departments in these profit-focused times is harder than ever.

Beck’s October album release, The Information, is a case in point in both regards. Designed and conceived by Big Active, it comes with a graph-paper cover and a pack of stickers allowing fans to customise their own sleeve. ‘They did something which helped to rethink what a record sleeve could be,’ says Marling. 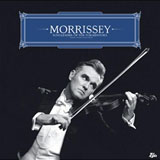 ‘Initially, we took it to the American label [Interscope] and they really loved it, even though, traditionally, they don’t tend to step too far out of the box, just because of the logistics of that kind of packaging,’ says Saint. In the UK, however, Official Chart Company rules dictated that the album would be disqualified from the chart if sold with stickers, which constitute a free gift. But Beck and his management did it anyway.

This ‘furore’ made news in the music press, but it illustrates the thankless task of attempting to push this medium forward. Perhaps, in an age of interaction and rich content, our attention is now spread so thinly that an album cover can never make the impression it once did, when it was virtually the only visible portal into a performer’s world.