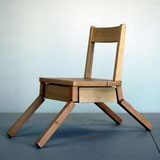 Life Forms explores how robots can be programmed to mimic human behaviour – and the lessons we can learn from devices that react to their surroundings in the same way we do. Alex Wiltshire takes a closer look

Life Forms, the opening exhibition of London’s new Kinetica museum, is hardly short of mesmerising exhibits, but its star is a 30-strong troupe of performing robots. Once a day, these anthropomorphic and zoomorphic metal forms spring into motion, interacting with each other in what is more performance than mechanical spectacle.

Situated in Old Spitalfields Market, Kinetica is touted as the UK’s first museum devoted to ‘kinetic art’, a term that covers a diverse body of work, from interactive light installations to mechanical devices. The robots are a work called Ancestral Path by US-based Amorphous Robot Works, a collective of artists, engineers and technicians led by artist Chico MacMutrie. Like much robotic art, ARW’s work is about exploring humanity by infusing machines with human-like behaviour.

Robotics is becoming a part of everyday life. The technology has become cheap enough for the Robosapien robot toy to be a Christmas bestseller, and for people to build their own. Five years ago it was hard to find accessible guides on doing this, but now you can buy a kit for a bipedal Brat robot from Lynxmotion for $300 (£157) and Lego produces a range of programmable robotic components.

This upsurge in popularity has lent MacMurtrie’s works new relevance, not least for the humanity found in works like The Tumbling Man. One person controls the legs and another moves the arms; they have to co-operate to move it effectively. ‘I wanted to make a humanoid machine that tumbles like a child, but with the force of a piece of heavy machinery,’ says MacMurtrie. ‘It was a struggle to make it perform so elegantly that when people watch they feel for it.’

Max Dean is co-creator of The Robotic Chair, seen at the Ars Electronica Festival in Linz in September, which explores the process of imbuing inanimate objects with humanity. The chair is designed to fall into pieces and laboriously reassemble itself in an act of methodical self-preservation. An earlier project, The Table, is able to sense and select a single person in a room with whom to attempt to strike up a relationship with attention-seeking wiggles and turns. ‘There is a desire to understand who we are, and one way of doing this is to try to duplicate ourselves,’ says Dean. The chair and table are the results of Dean’s collaboration with Raffaello D’Andrea, a professor of engineering at Cornell University and one of the founders of Kiva Systems, a company that manufactures robots to automate warehouse systems. ‘Their behaviour and actions and the subtleties of their motion are a result of the algorithms I developed for them,’ says D’Andrea.

The third member of the team was Matt Donovan, an artist and industrial designer for artists. He fitted the robot’s mechanism and circuitry into its seat. Robotics is a natural part of product design to Donovan. ‘We already have lots of objects around us with simple circuits,’ he explains. ‘Design is very interested in things like that. These types of simple circuit devices will only grow and become more complex.’

Such collaboration is common, but the science and art of robotics remain distant from one another. ‘There is potential for fruitful exchange between artists and scientists, although relationships seem to remain slightly tense,’ says robotics artist Andy Gracie. ‘[Scientists tend to] insist that there is a “meaningful product” at the end of the project. They need closure, whereas an artist might seek something more open-ended, or even something that critiques the scientific process.’ 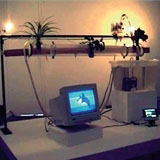 Gracie’s work is about creating ‘ecosystems’, or symbiotic relationships between plants, animals and robots. In Small Work for Robots and Insects, a four-legged robot dances to the sounds made by crickets, and in Fish, Plant, Rack, a robot charged with looking after plants in a hydroponics system interprets the pattern of charges made by an electricity-producing elephant fish as instructions for its actions. Part of his interest is in seeing how robots interface with natural systems.

Such works are an essential part of beginning to understand a future lived with robots. But it also explores human relationships with inanimate objects, like furniture, and even ourselves. ‘It is one of the most important new mediums that will be around for our lifetime and beyond,’ says MacMurtrie. ‘We live in a robot world.’