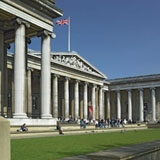 The British Museum is holding a pitch to redesign a trio of gallery spaces, with exhibition design specialists Land Design Studio, Softroom and Ralph Appelbaum Associates among the consultancies included in the initial stages of the process, Design Week can reveal.

Although the details are being kept tightly under wraps, the brief is to overhaul three of the museum’s permanent exhibition spaces. Geoffrey Pickup, principal designer at the British Museum, confirms a pitch is underway, but declines to reveal further details at this stage due to sensitivities over sponsorship deals. He says a shortlist of consultancies will be drawn up in the ‘near future.’

It is understood that the museum will either appoint one consultancy to redesign all three spaces or divide the project up between different groups.

The projects are part of an ongoing gallery renewal programme at the London museum, according to a spokeswoman. Consultancies are currently appointed on a project-by-project basis, although the museum may implement a roster of design groups in the future, she adds. Its Ancient Iran, Roman Britain and Birth of Agriculture galleries are presently being redesigned by the British Museum’s 12-strong in-house team, led by Pickup, following a £100 000 cash injection from The Department for Culture, Media and Sport and the Wolfson Foundation in August (DW 17 August). The galleries will relaunch in April. The in-house team also relaunched the suite of Japanese Galleries last month.

Other recent high-profile exhibitions at the museum include Metaphor’s Renaissance-inspired design for the museum’s first Michelangelo exhibition to take place for 30 years. Full-size figures from the Sistine Chapel were projected as part of the exhibit and drawings were displayed on freestanding lecterns grouped in alcoves (DW 2 March).

• November 2006: Land Design Studio, Ralph Appelbaum Associates and Softroom among consultancies in pitch to redesign three permanent galleries; shortlist yet to be made

Designers should think beyond charge-out rates