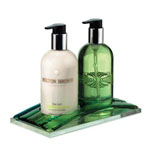 Conran Design Group has been appointed by upmarket cosmetics company Molton Brown to oversee all its brand communications, as the retailer seeks to expand its presence into global markets.

The appointment, worth a six-figure sum, follows a competitive three-way pitch which was conducted in stages over a three-month period.

Molton Brown was bought out last year by Japanese company Kao Group, which claims to be the world’s seventh largest cosmetics producer. As a result, the brand is seeking to develop a unified design signature for all its 2D communications.

‘We are expanding rapidly outside the UK but we have never had corporate identity guidelines before,’ explains Molton Brown group marketing director Amy Nelson-Bennett. ‘We’ve grown extremely quickly and need guidelines to police our identity properly as we get bigger.’

Molton Brown has a store roll-out programme that reaches across the US, Japan and Asia-Pacific regions. The company already has an in-house graphic designer and, according to Nelson-Bennett, has not ruled out working with other design consultancies. But CDG will be responsible for designing a brand identity on which further activity will be based.

‘We never do above-the-line advertising and I don’t think that’s a route we’d go down,’ adds Nelson-Bennett. ‘That means we need to do more talking about Molton Brown at a brand level.’

CDG’s brief is to create an innovative identity that will stand out in the crowded cosmetics sector, she says. ‘We want something distinctive that isn’t the same as what everyone else is doing. We were looking for a consultancy that instinctively empathised with us and our brand values, and CDG did this.’

CDG managing partner Jane Simmonds says the key challenge will be finding a design structure that is accessible enough to work in all Molton Brown’s new markets.

‘We want to give a consistent and coherent personality that fits better with the product,’ she says. ‘Molton Brown is a highly individual premium brand and we want to consolidate this.’

Simmonds declines to say whether the brand’s iconic typeface and lotus flower motif will remain a part of the corporate identity. Nelson-Bennett says there are no plans to change Molton Brown’s packaging in line with the corporate identity review. However, the shake-up is likely to permeate all areas of the company. ‘This is a pivotal project for us, particularly as we look to grow,’ she says. Molton Brown was founded in 1973 in Mayfair and is known for its luxurious yet modern products, which include hand, skin and body care cosmetics and a home and travel accessories range.

• Named after South Molton Street in London, where its products were used in a hair studio