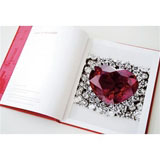 Garrard, the House of The Crown Jeweller, has appointed Grade Design to act as brand guardian in a major revamp of all its global catalogues and printed brand communications.

The shift has been prompted by Garrard chief executive Robert Procop, appointed after the jeweller was bought out by American billionaire Ronald Burkle in March. Procop hopes the review, which will focus on replenishing the brand’s classic British credentials, will help fight off competition from the likes of Tiffany & Co.

Prior to Grade Design’s appointment, the prestigious jeweller suffered from a lack of unification in its branding, says consultancy creative director Peter Dawson. The consultancy has also overseen a unification of the house typeface.

‘The corporate colour involved a four-colour process, which resulted in massive global inconsistencies. Our first job was to find a spot colour, which we now apply to all the communications, and we have written strict brand guidelines for anything designed in-house,’ says Dawson.

Grade has produced Garrard’s first new catalogue in two years in time for the Christmas season. The 84-page case-bound catalogues will be distributed to English-speaking and Japanese markets.

As well as housing flagship pieces such as the Heart Of The Kingdom ruby, Garrard has a range of contemporary pieces designed by creative director Jade Jagger. Photographer Pete Gardner, chosen for his micro-photography experience, used a mixture of ‘slightly avant-garde’ and more classical imagery to capture both strands of Garrard’s business.

One of the oldest jewellery houses in the world, Garrard has designed rings for Princess Diana, tiaras for Queen Victoria and a pendant for hip-hop artist Missy Elliot.