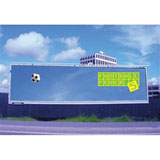 A planned network of football centres is to launch across London and the South East, with branding, interiors and signage by Holmes Wood.

The consultancy was appointed following a credentials pitch initially to create the visual identity, but will now work on the overall branding of the centres, as well as marketing materials and advertising, according to Holmes Wood project director Kirsty Morrison.

Rolling out over the next two to three years, the centres are being designed by Leeds-based Jamm Architects. The project is backed and funded by Big Yellow Self-Storage Company founders Nick Vetch and Phil Burks and Sky Sports presenter Richard Keys.

‘The identity references the yellow colours of Big Yellow Self-Storage Company, but they didn’t want the company to be too overtly associated with the Football Fever centres,’ says Morrison. ‘We will liaise with the architects to ensure the brand also works inside the buildings,’ says Morrison.

Football Fever is searching for suitable sites in London, as well as in towns outside the city, including Reading and Brighton. The company is hoping to secure up to seven sites, each with an area of at least 2.5ha.