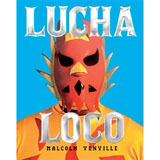 Giant Haystacks and Big Daddy it ain’t. Fanatically followed by tens of thousands of working-class Mexican men, women and children since the 1930s, lucha libre (literally ‘free fighting’) is in turns brutish, balletic and bizarre.

As well as all the high-octane athleticism and allegory, it’s the garish, extravagant costumes that have prompted photographer Malcolm Venville to produce an extraordinary book of portraits of Mexico’s top wrestlers, or luchadores. In the course of several trips to Mexico City, he’s whisked more than 120 of them away from the frenzy of the ring to the serenity of the studio, shooting them on a large- format camera against a plain grey backdrop to heighten the detail and drama of their wonderfully surreal, outré outfits. 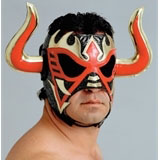 The handsome, self-published book is a true labour of love, with lavish production values and almost absurd attention to detail. For example, each wrestler’s fighting name (Dr Muerte, Blue Demon, Escorpion Jr) has been set in a different bespoke type by the book’s designer Andy Dymock, along with a carefully selected quote, which seeks to capture the enigma of these magnificent, muscular, masked folk heroes.

Lucha Loco is published by Therapy, available at selected outlets and via www.luchaloco.com, priced £45