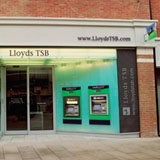 Lloyds TSB is beginning the trial of an overhauled branch design at a number of key locations in the capital, designed by the bank’s in-house team.

A spokesman for the bank declines to reveal any details about the format, other than confirming it is ‘in development’. The design may be rolled out across the company’s estate.

The programme is being led by the bank’s in-house property management team and will generate customer feedback on the branches, now referred to as ‘stores’. The full details of this programme are expected to be announced in early 2007.

Branches including London’s Cheapside and Oxford Street locations are being refurbished with the design, which includes a bright white facia.

In keeping with trends in high street bank design, the Lloyds TSB interiors are understood to offer customers more of a retail experience. ‘The stores currently being refurbished are consistent with the look of the new design,’ said a spokesman for Lloyds TSB.

This July, HSBC announced plans for a ‘megabank’ similar in concept to Apple Computer’s Regent Street store. Last week, Barclays Bank took on former format and design director of Tesco Stores Helen Dodd in the new position of head of network development. Dodd has responsibility for the design and format of all Barclays high street branches.