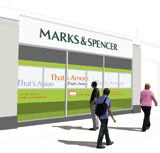 Marks & Spencer this week unveils an interactive window display created by digital consultancy De-construct at its flagship Oxford Street store, as the retailer ramps up awareness of its credit and loyalty card, &More.

The installation ‘sings’ an adaptation of Dean Martin’s ‘That’s Amore’, used in television advertisements for the card, while multi-colour lyrics and graphics move across six plasma screens.

‘The speakers measure the ambient noise on the street, then serenade people – at a slightly higher decibel level – as they walk by,’ he says.

The display also incorporates a tracking camera, which picks out the movements of passersby and mirrors the colours of their clothing – feeding this information back into the plasma screens.

The work will roll out – without the interactive element – across an additional ten Marks & Spencer central city stores this week.

It is the first time the ‘Whispering Windows’ technology and interactive media has been integrated for use in a major retailer’s advertising campaign.

Judges set for the DW Awards