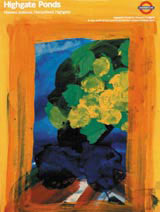 Original artworks used for iconic London Transport posters are shown together for the first time during Artworks for All from 15 October until 4 January.

George Nicholson’s photographic work is shown during Painting with Light, from 14 October until 2 November. The exhibition features over 60 of his images.

Until 30 November, American artist Martin Puryear‘s work is on show during his first large-scale exhibition in the UK, which showcases sculptural works as well as a selection of his prints.