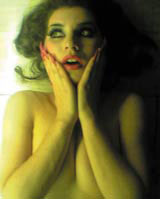 ‘I first encountered Alice Hawkins when I judged a recent The Independent fashion and photography award. She had submitted images of her friends, mostly Essex girls, who had shaved their pubic hair into sports logos. It wasn’t tasteful, but you need people to rock the boat.

The Independent chose not to run them because it thought they were too rude. But a month later, a Gucci ad campaign showed girls’ pubic hair shaved into a “G”. It shows she had the right ticket at exactly the right time.

I then invited her to contribute to [Knight’s] Show Studio live archive. She asked her friends, many of whom are lap dancers and strippers as she works part-time in Agent Provocateur, to pose for a series of diary-style, strip photographs they would like to send to their lovers. They were all taken with a picture mobile phone. The images are very beautiful. They’re intimate, with a Readers’ Wives quality, yet available globally on-line.

[Hawkins] is completely of her time – a modern young girl who happily embraces new technology. Is she a “photographer”? It’s a tricky term. Her images are not photography per se. The stars of tomorrow are inventing a new medium, a more exciting one with sound and text.’

‘It was Photoworks director David Chandler who first showed me some of Stephen Hughes’ photographs two-and-a-half years ago. “What do you think of these?” he asked, passing them to me in a card box one lunchtime. The box had maybe 20 prints in it, and although I don’t recall which of the pictures I saw first, I do recall that I liked them immediately.

In such a situation you expect the law of diminishing aesthetic returns to apply, as the good pictures on the top of the pile gives way to those less resolved and, finally, those that provide physical thickness – rather than conceptual depth – to that which is on offer. But this didn’t happen.

I am drawn to the landscapes that Hughes photographs: the back of hotel complexes, beneath motorway flyovers, country parks, lorry parks and the edges of things. Many photographers work in such places, but few do so with the quiet self-assurance of Hughes. He makes photographs that are intelligent, moving and very beautiful.’