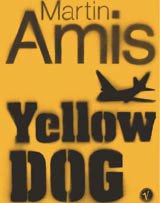 Suzanne Dean is surrounded by books. Her office has floor to ceiling shelves crammed with them. Piles of them lurk under her desk, ready to topple, and there are more by the door, making a bid for freedom. Her home, she tells me, is packed with books. And she spends every moment at work thinking about them.

As creative director at London publishing giant Random House, Dean has the enviable job of designing book covers. She oversees 12 imprints, among them Heinemann, Chatto, Vintage and Secker & Warburg.

She’s passionate about sleeves’ importance. ‘Books don’t have long to catch people’s attention in store, a few seconds maybe. It’s the cover’s job to grab them,’ she says. If you thought that meant flicking through a photolibrary and positioning some type, think again.

First, there’s the book itself. If it’s finished, Dean reads the entire manuscript before she starts on the cover. If not, she’ll read what’s completed – a few pages, a synopsis, half a dozen chapters. ‘It’s exciting reading the book in its raw form,’ she says. ‘Some briefs are tight, specific to a passage. Others are much wider. So a manuscript is never too much information. You have to know the whole book, or it’s like walking out of a film before you’ve seen the ending.’

It’s only when she knows the book that she has a feel for what type of cover will work, and which designer would be best suited to it. Dean runs a team of 13 designers and two picture researchers, and designs as many covers as possible herself.

Designers source illustrators or photographers. Which works best? ‘It depends on the book. When I joined here [in 2000], photography was everywhere, but illustration is coming back. It goes in cycles,’ she explains.

She knows the workloads and strengths of her in-house designers well and recognises who would treat a contemporary crime novel better than, say, a big non-fiction tome, she says.

Their work is often individual, but sometimes the team collaborates. A recent job involved rebranding a collection of 12 classic Vintage titles in ‘pocket-sized format, with the brief to popularise them, strengthen Vintage’s brand and emphasise the breadth of its backlist. Six designers took two books each – from Laurie Lee’s Cider With Rosie to Death in Venice by Thomas Mann – but tried to tie each into an overall ‘feel’.

‘It’s nice to work as a team and discuss the titles as a group,’ Dean says. ‘We usually work alone so when the opportunity arises to work together, it’s great.’ The success of the classics work has led to a further range – a 12-strong series of Vintage titles rebranded ‘Sex Classics’, out next August.

Out of house, she has commissioned the likes of Alan Kitching and The Chase creative director Harriet Devoy and designer Marc Atkinson to redesign Martin Amis’s backlist (DW 21 August). She’s always on the hunt for new talent, she says. ‘I spotted [Devoy’s] work on the cover of a magazine. The whole time we’re looking for illustrators, designers and photographers,’ Dean explains.

The brief from editors is often to ‘broaden readership’ rather than a specific creative one. Dean oversaw the revamp of Japanese star author Haruki Murakami’s oeuvre earlier this year. Sales have doubled, she says.

Often, a book cover demands a larger-scale approach. The sleeve of Ian McEwan’s novel Atonement ‘had to have a photograph’ on the cover, Dean explains. The shoot itself turned into a mini film set, with location scouts, wardrobe, make-up, stylists, photographer Chris Frazer Smith and one increasingly short-tempered East End child model. Dean liaised closely with the author, his agent as well as Random House editors.

‘We apply the same dedication to every author,’ she says, lest she be accused of favouring the better-known names.

For Dean, it’s hugely important that she continues to design herself. She has weekly cover and design meetings and often works at weekends to ensure she has time to design.

She proudly shows me the cover for The Dante Club, a novel by Matthew Pearl published next January, for which she has hand-drawn a fly and a maggot for the jacket, commissioned hand-lettering by Stephen Raw and sourced old, distressed books to replicate.

Apart from a spell at packaging consultancy The Green House as a junior designer, she has always worked in publishing. She jumped just two years later into a senior design role at Penguin Books. ‘It was quite a leap to suddenly be given a manuscript to read, and to source illustrators and photographers. What a change,’ she says. She looks too happy where she is to make another one soon.