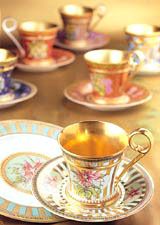 Royal Doulton has recently announced a pre-tax loss of £14.4m for the half year to 30 June and proposals to undertake a restructuring programme which will cost the company 1500 jobs.

While the company has announced a new range of products and a reduction of the existing lines planned for the future, it declines to comment on the specific steps it will take to revamp its image.

The chinaware manufacturer is suffering from a strong sterling exchange rate and Asia’s economic crisis, which has damaged most UK ceramics export figures. The failure of the ceramics industry to transform itself from a manufacturer into a sector with lifestyle appeal has meant job cuts in the industry heartland of Stoke-on-Trent.

One main reason for the industry’s crisis is the death of the formal dinner ritual. This has affected the luxury end of the market, where people are no longer buying bone china tableware.

Another problem lies in what the managing director of James Sadler Richard Eagleton defines as the industry’s failure to talk directly to its consumers. “Consumers have become much more sophisticated,” he says. “But the UK ceramics industry has always been trade rather than product-focused and is failing to target them.” With figurines and floral patterns ceasing to be everybody’s cup of tea, the chinaware industry needs to apply marketing strategies to re-invent British tradition in the next millennium.

Wedgwood creative director Jill Sharrock also believes the ceramics industry should be consumer-focused. “We are a design industry,” she says. “But the UK ceramics industry is very introverted. It fails to look outside and it marginalises design.” The company decided to change its image in 1997, commissioning London design consultancy The Partners to create an identity that would work globally.

Although what Wedgwood was selling was quintessentially British style, the brand was perceived in slightly different ways around the globe. In Japan it had a Gucci-esque status, with the brand stretching to scarves and bags, while in the US it was perceived as a brand you would find in any outlet centre.

Wedgwood took the bull by the horns and transformed itself into a lifestyle brand, while retaining the qualities of craftsmanship and heritage it was traditionally associated with. At the August Frankfurt trade fair, it presented a new line, Contrast, created from three Wedgewood archive prints. Future plans include collaborations with Irish fashion designer Paul Costelloe, product designer Nick Munro and a new Tayburn-designed back stamp to celebrate the millennium and Wedgwood’s 240 years of production.

Wedgwood’s success may have something to do with its association with Waterford Wedgwood, the luxury brand group chaired by Tony O’Reilly. The company has not only recently won the licence to be the official producer of ceramics gifts for the Millennium Dome, but also bought All-Clad, the US luxury kitchenware company, for $110m (£69m) last month. The news that Wedgwood has appointed The Duchess of York as its US ambassador confirms its eagerness to maintain a high profile in the US market, where sales remain strong.

Waterford Wedgwood also owns Rosenthal, the German porcelain manufacturer. Its pedigree relies on a list of collaborators, from Walter Gropius to Queensberry Hunt, that reads like a Who’s Who of the design world. It has always been at the industry forefront, turning good designs into production realities. At Frankfurt, the group showed Jasper Morrison’s new products for the Moon range and a gift collection by London furniture and product design group Platt & Young called Spirit.

“We are trying to perk up the industry,” says Robin Platt of Platt & Young. “Treating porcelain as an artistic and creative material, you can have fun and create a contemporary flavour.” Rosenthal’s other new ranges, including collaborations with Versace and jeweller Bulgari, confirm its commitment to establish china as an ultimate object of desire.

Contemporary design seems to be the future for ceramics manufacturers. If china comes with a prestigious name and lifestyle attached, customers are more likely to buy it, for the same reason they would buy a designer jacket.

But ceramics is still a fragile business; the time it takes to produce, especially in the case of hand-made porcelain, is painfully long. “Porcelain is like a dinosaur in the 20th century,” says CÃ©cile Hohenlohe, creative brand manager of Six Degrees, which has among its clients Nymphenburg, the German porcelain manufacturer established in 1747. Its one-off pieces and royal commissions put Nymphenburg in the top echelons of the market. “Our porcelain mass has to age in a cellar like a wine for at least two years and every piece is handmade and unique,” she says.

So what can Royal Doulton do to improve its sales and image? Bryan Hook, creative director at Tayburn has worked on identities for two very different clients, Wedgwood and James Sadler. The latter revamped its identity last year, changing its name from old-fashioned James Sadler & Sons Limited. The consultancy designed packaging for the latest tableware collection, the Millennium Breakfast Set.

Hook’s advice to Royal Doulton is straightforward marketing common sense: “It should look at its name, establish who it is and represents, target its audience and where it wants to be in the long term. It will find that there are positive things about its brand.”