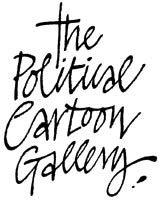 The Political Cartoon Gallery, which is billed as the world’s first gallery dedicated to political caricature, opens in London’s Store Street next week, with interiors by Tom Gilby and an identity by Bruce Nivison.

The 139m2 space will also house a themed cafÃ© and a retail area that will sell artwork by leading cartoonists.

The brainchild of Political Cartoon Society founder Tim Benson, the gallery will host exhibitions themed along historical and political lines.

‘There isn’t anywhere in the UK to view cartoons and caricatures,’ explains Benson.

‘The gallery will give people the opportunity to appreciate both the illustrators’ work and provide a visual history of the time in which they lived.’

Interiors feature a monochromatic colour scheme that reflects the nature of the work on show, adds Benson. An existing spiral staircase has been refurbished and is the central feature of the space.

Tables in the cafÃ© have a base in the shape of an ink-blot and a mural by today’s leading political cartoonists – including the Guardian’s Steve Bell, Morten Morland of The Times and Dave Brown of The Independent – adorns the walls.

The hand-drawn marque, which has been applied across signage and stationery, is intended to reflect the ‘hand-drawn nature of a cartoon’, says Nivison.

The Political Cartoon Gallery opens on 15 September, with an exhibition of the work of Leslie Illingsworth, the cartoonist famed for upsetting Adolf Hitler.