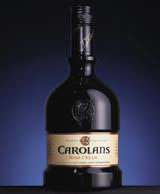 Irish cream liqueur brand Carolans is to unveil the first major packaging redesign since its creation in 1979, with Wren & Rowe overhauling the bottle shape and labelling. The consultancy won the five-figure contract following a credentials presentation in 2000.

The brand relaunches this autumn as part of a 216m (£11m) investment by owner C&C International.

The redesigned bottle moves away from the traditional sloping shoulder style that is used by most Irish cream brands. The labelling has been refreshed to a ‘contemporary, minimalist strip’ that is inset into the glass.

‘This is Carolans’ first major overhaul since a label redesign in 1995,’ says C&C managing director Brian Walsh. ‘It involves everything, from new glass moulds to rebuilding the production line.’

‘The key thing is to keep the brand in its number two position [in the US] and also try to take share from other brands and grow the sector,’ says Foulkes-Arellano. ‘Where Baileys is moving towards a lifestyle branding, Carolans leans heavily on the traditional Irish, Celtic heritage.’

Research conducted in New York showed that US consumers place high value on the drink’s Irish origin. ‘The design is about putting in cues saying Old Ireland,’ explains Foulkes-Arellano.