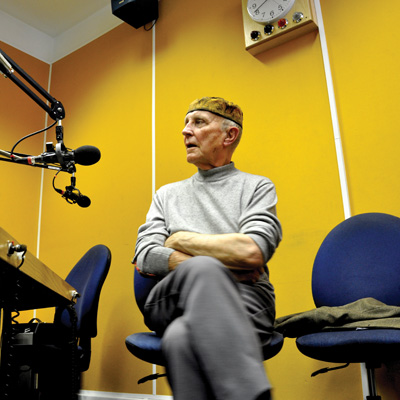 It is often remarked that design is everywhere. This is true not only in the sense that we are surrounded by ’designed’ objects, but also in terms of design coverage. The many and multiplying design blogs could feed even the most voracious of visual culture appetites, while sumptuous monographs and design bibles in print deliver a more tactile canon of work.

When we talk about design we usually also look at it. But what happens to the quality of discussion when designers are temporarily disconnected from the work and left without recourse to visual and physical examples?

Perhaps one of the best ways of exploring this question is to consider design on the radio. This is not a facile gag about ’having a good (type)face for radio’, but a question of how we might talk about design away from the glare of the objects themselves.

There aren’t many radio programmes or podcasts dedicated to the discussion of design, but there are a few. Adrian Shaughnessy’s Graphic Design on the Radio, produced for London’s Resonance 104.4 FM, is quite well known in the capital, and then there’s Design Observer’s Design Matters series, hosted by Debbie Millman. There is even a whole radio station dedicated to typography, Typeradio, which is produced in the Netherlands.

Another programme is 99% Invisible, a US design and architecture radio series produced and presented by reporter Roman Mars. For Mars, the audio format is well suited to design. ’Radio may not seem like the most natural medium for a design series, but it’s not as incongruous as you might think. It exposes all the thought that goes into creating things, which people scarcely ever think about, and the stories of what objects say about us. Thought and story are what radio is all about,’ he says.

Radio forces interviewees to adopt a more reflective take on their practice. Design is a process, not simply a finished ’thing’, yet often it is only the end result that we get to inspect. This sometimes creates tensions, even within the design community, because critics are seldom given access to the designers’ brief or creative process – the full story is rarely revealed.

’Designers are very happy to sit and show you work, but without those props they are actually forced to talk about something more,’ explains Shaughnessy. Mars agrees, saying, ’The programmes have to be driven by the narrative and not by the beauty or glory of the object. This is good – I have absolutely no interest in fetishising objects. And designers themselves have great stories and can tell you about every detail and the entire evolution of their thought process. They can provide the story, the big picture and a moment of reflection.’

Writing can also explore this deeper, more reflective look at design, but very often the text is accompanied by a spread of illustrative images. This is not a hindrance, but it is different to the audio format. According to Shaughnessy, only very rarely does a radio interview suffer from the lack of visual reference. One of those occasions was in Millman’s Design Matters interview with Canadian designer and illustrator Marian Bantjes.

’In the 100-plus broadcasts that I have done of Design Matters, I’ve never wanted so badly to be able to show something to my listeners as I do now, because there is really no other way to experience this book [Bantjes’ I Wonder] other than to see it,’ declared Millman during the interview. However, on the whole she says the radio format allows her ’to discuss the motivation for creating something, or the philosophy of designing, rather than [being] seduced or titillated by the thing itself’.

Moreover, Shaughnessy believes that there is a growing interest in the more ’theoretical and discursive’ elements of design. ’I couldn’t have done Graphic Design on the Radio ten years ago,’ he says. If the exploration of these elements is precisely suited to the radio format, then perhaps we shall hear more design on the radio yet.