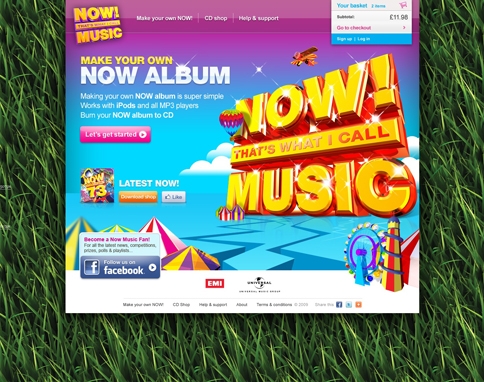 Launching today, the site allows users to create their own compilation albums from popular Now tracks.

The Team was appointed by Universal and EMI 18 months ago following a four-way creative pitch.

An initial brief was established to create a new digital revenue stream for the brand, as at that point the compilations were only available through resellers such as iTunes and Woolworths.

The Team was briefed to keep the site simple to appeal to the Now fan base, which tends not to download music or use iTunes, says The Team creative director Will Bloor.

The look and feel of the site reflects the Now branding and features tiled grass branding, fairground imagery and a bespoke 3D version of the iconic Now logo.

Bloor says, ‘We had to metaphorically steep ourselves in the bath of Now. We wanted to make it as big, bold and brash as possible.’

Pentagram ‘redefines’ the look of the RSA