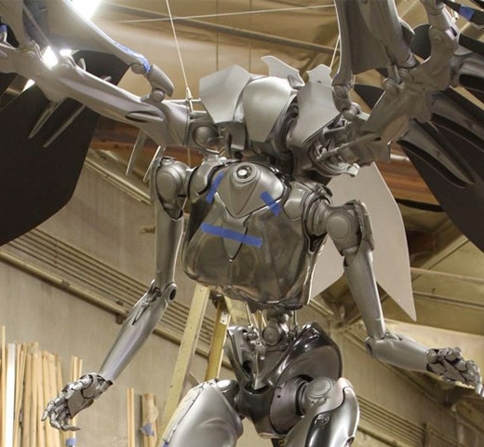 Designed in-house, the company says its revamped store – which opens today – reflects ‘product technologies’ and promises to ‘deliver the unexpected’.

Oakley chief executive Colin Baden says, ‘The idea of just piquing people’s interest wasn’t even on the drawing board.’

The angel has been designed with carbon fibre wings spanning 7.5m and is suspended from the ceiling of the two-storey space.

Oakley claims ‘a sizeable portion of the English population put faith in guardian angels’ and that it therefore sought to create the ‘quasi-android’ figure, designing, prototyping and building over seven months, taking inspiration from seagull wings and the landing gear of commercial aircraft.

The store will also feature a chandelier made of 4000 pairs of Oakley Holbrook sunglasses hung from the stairway of the second floor.

The redesigned store also now has an Oakley Custom lab where customers can design and etch their own sunglasses and goggles.