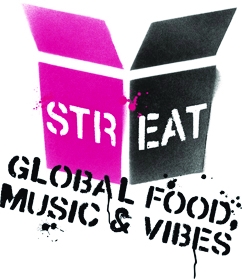 Streat will serve street food from all over the world, featuring dishes from Thailand, India, Spain, Indonesia, Jamaica and other countries. The collective is also planning live entertainment and activities for kids.

The brand logo, which took two weeks to finalise, shows a sprayed image of a take-away food container, which has been stencilled and includes the strapline ‘global food, music and vibes’. The consultancy was appointed to the work directly.

The logo, to be displayed on banners at various street parties as well as printed and digital collateral, is bright pink with black and includes a paint splatter effect. The food container box shape was produced by creating a real stencil, using black-styled Urbana as the font.

Derek Edwards, lead designer at Patwa Design, says: ‘The logo is designed in the style of a graffiti stencil to help emphasise the street aspect of the brand.’

Edwards says the logo was a result of trial and error before settling on a logo that bleeds through the stencil, representing the rough and readiness of the ‘on-the-spot’ nature of street food.

Marketing group Coconut Chilli Digital initiated the Streat concept, which will display between six to ten stalls. Those selling the food on offer will be people from local communities.

The Streat food collective will be serving food between 11am and 8pm on Anchor Square, Harbourside, Bristol as part of Bristol’s Royal Wedding celebrations on Friday 29 April.