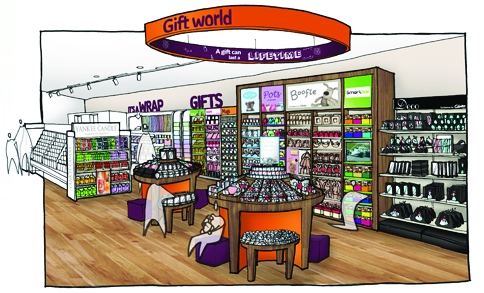 The Yard Creative’s store designs are set to launch at four trial stores, rolling out from the end of the month. The new stores are based around ease of use for the customer and incorporate emerging technologies.

James-Royle says, ‘We’ve really been pushing this idea. There will be areas around the store that will act as touchpoints for the customer. The augmented reality section will feature a 42-inch screen so that people will be able to see the appeal of the AR cards.’

The new stores have also been decluttered and feature clearer sightlines, while card displays have been improved to make it easier for customers to navigate.

James-Royle says the decluttered designs were developed following a research stage that saw Yard Creative staff don Clinton Cards uniforms and work at the store. He says, ‘We also went into the stores as customers, we were trying to understand how someone in the store goes through the buying process.’

The stores will also feature newly defined store fronts showing the local store address as well as the founding date of the brand. This aims to tap into both locality and the heritage of Clinton Cards.

The new store format will launch in Nottingham and St Albans on 26 April, followed by Uxbridge and Bristol on 3 May.

The Yard Creative was appointed to the work in July 2010. Loewy group Branded has been working on a rebrand of the company since early 2010, looking at elements of the Clinton brand including the identity.

Scenes from an impending marriage